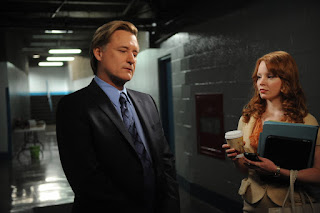 A one-time school teacher who became a notorious child rapist and killer. He was in the process of being executed when the Miracle Day event took place. This was when no-one on the planet could die. Danes was freed from prison on a legal technicality, but found himself despised by everyone as he had never shown any remorse for his crimes. He eventually accepted assistance from a PR agent named Jilly Kitzinger to act as a spokesperson for the pharmaceuticals giant PhiCorps. He appeared on a TV show where he broke down in tears and asked for forgiveness for his crimes. This was all a sham, as he admitted to Captain Jack Harkness. The public began to see him in a new light however, and he found himself idolised. Jack realised that Danes really harboured a death wish. This is why he had been so unrepentant. Jack tried to get him to speak out against PhiCorps. Danes did turn against the company when he learned that criminals such as himself were to be incinerated alive. He went on the run and made his way to Cardiff where he was captured by Gwen Cooper. He told Torchwood that he knew of the location of the Blessing - the phenomenon which was causing the Miracle. He accompanied Jack and Gwen to Shanghai which was where one half of the Blessing was located. He had explosives strapped to his body in order to hold the Family who were behind PhiCorps at bay whilst Jack negated the Blessing with his own now mortal blood. Danes then detonated the explosives once Gwen and Jack had gotten clear, killing himself and burying the phenomenon.