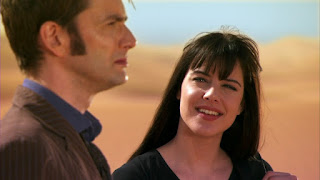 Free-spirited daughter of a financier who had lost his fortune after the collapse of the Icelandic banks, Lady Christina took up a career as a cat burglar - partly to make money but mainly for the thrill of it. Detective Inspector McMillan was obsessed with capturing her. One evening she broke into the National Museum in London, to steal the Cup of Aethelstan, a golden chalice. The theft went to plan initially, but on leaving the building she saw that her getaway driver had been arrested by McMillan. She jumped on a passing bus. Next to her was the Doctor, who was attempting to trace some temporal distortions. As it passed through a tunnel beneath the Thames, the bus was transported through a wormhole to the desert planet of San Helios. Lady Christina immediately took charge over the other passengers, but soon deferred to the Doctor once it was revealed that he had experience of this sort of thing. She accompanied him to the crashed Tritovore spaceship and used her burglary skills to fetch the components needed to levitate the bus out of the sand and get them back home through the wormhole.
When they got back to London, she wanted to go travelling with the Doctor but he refused to take her. She was then arrested by McMillan, but the Doctor used his sonic screwdriver to unlock her handcuffs, and she escaped in the flying bus.