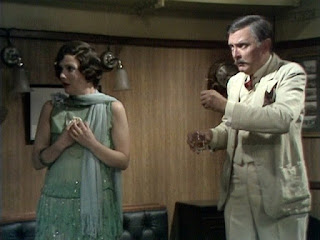 Major Daly and his daughter Claire were passengers on the ship SS Bernice, which was taking them to a new life in India, in 1926. The Major knew the country well and had a plantation there, but Claire had never been before. As the vessel crossed the Indian Ocean, it was snatched up by a Miniscope. This alien device contained specimens of various life forms which were held in time loops. The TARDIS materialised within the Miniscope, in the hold of the Bernice, and the Doctor informed Jo that this ship's disappearance had been almost as famous as the mystery of the Mary Celeste. They witnessed Major Daly, Claire and the crew repeat their actions every 20 minutes or so, as the ship came under attack by a prehistoric Plesiosaur. Claire had developed a crush on the ship's lieutenant, Andrews. When Drashigs broke out of another circuit and attacked the ship, Major Daly helped Andrews kill one of them. The Doctor later sent all the specimens back to their rightful times and places by linking the Miniscope to the TARDIS. The Major and his daughter continued on their voyage, with only the vaguest sense that the journey had seemed to take a very long time...