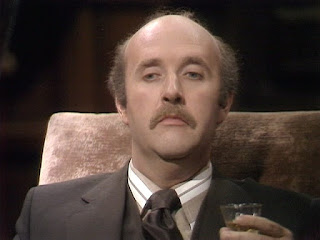 Leader of the British Institute of Druidic Studies, Leonard De Vries owned the large house, Boscombe Hall, which abutted the land on which the Nine Travellers prehistoric stone circle was built. He and his followers held ceremonies at the circle, where they worshipped the ancient Celtic goddess Cailleach. De Vries had in his possession portraits of the many women who had owned the land over the centuries - all likenesses of local woman Vivien Fey. He also had a pet crow, which carried messages from the Cailleach.
The Doctor visited De Vries to learn more about the circle, only to be drugged. He awoke to find himself about to be sacrificed by De Vries and his followers. They were scared off by the arrival of Fey's friend Professor Amelia Rumford. As they had failed to make the sacrifice, De Vries and his friend Martha were killed by the Ogri - blood drinking stone aliens which formed part of the circle.