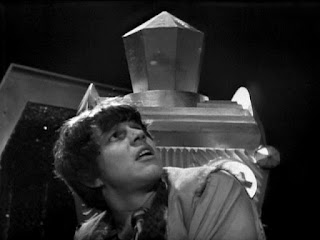 You may have noticed, if you ever write about Doctor Who stories, that the spell-check usually offers "Croutons" as a replacement for Krotons. (Though today for some reason I am being offered Protons or Kilotons). Croutons is very apt, however, as this was indeed an inspiration for the name of the titular creatures, as they were created out of a chemical soup.
This story, the first for the series by Robert Holmes, has an interesting history. For a start, it was a last minute replacement for another story which fell through late in the day. Holmes originally came up with a story called "The Space Trap" as a submission for the series Out of the Unknown. It was rejected, so Holmes restructured it for Doctor Who, submitting it towards the end of the William Hartnell era. It was received by Donald Tosh just as he was in the process of departing from the show. He thought it had some merit, and held onto it. Jump to a few years later and the script situation on the programme was becoming a bit of a nightmare. Derrick Sherwin had already cut The Dominators down to 5 episodes, necessitating him writing a new opening episode for The Mind Robber. The Invasion has been expanded from 4 to 8 episodes. Other storylines being developed were falling apart - such as Dick Sharples' deeply misogynistic "Prison In Space". Terrance Dicks went through the "slush pile" of old scripts that were still on file and came across Holmes' effort. Like Tosh he thought it had some merit, and asked Sherwin if he could proceed with polishing it up a little with Holmes as a potential stand-by script, making it fit the current TARDIS line-up.
Another behind the scenes headache at this time was Frazer Hines' on / off resignation from the programme. Had "Prison in Space" been made, a new male companion named Nik was to have joined the series, but Hines was talked into staying on to the end of the season by Troughton so that they could leave together. Troughton's departure was announced during the broadcast of this story. 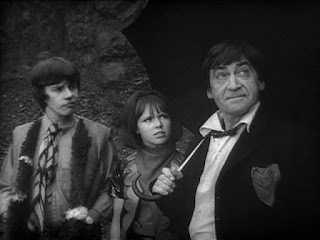 The basic premise of the story is that there is an alien race (the Gonds) who are being held back, technologically, by another race (the Krotons). The latter crash-landed on the planet centuries ago, and they have been manipulating the natives in order that they develop to a stage where they can be used to help them get back home. The way they go about this does not make much sense. Each year, the smartest of the Gonds is invited into the great teaching machine - the Dynatrope - where their mental energy is drained. The hapless Gond students are then dissolved by acid in the wastelands beyond the machine where their fellows are forbidden to go. To get the Gonds to the right level, yet make sure they don't develop so much as to become a threat, the teaching machine is selective in what it promotes. The big problem with all of this is that by killing the smart students, thus preventing them from procreating and producing potentially even smarter kids, the Krotons are actually holding the whole race back too much. They are only going to get a minimal amount of mental energy with each intake - not enough to provide sufficient energy to reanimate them and allow them to leave the planet, which is the whole point of the exercise. 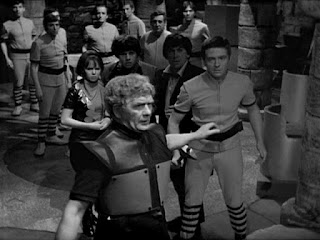 It is only when the Doctor and Zoe sit the tests that the energy is produced to bring the Krotons out of their dormant chemical slurry state. The chemical in question is Tellurium which, for once, is not a made up element. It has the symbol Te, and the atomic weight of 52. It has a hexagonal crystalline structure, which is reflected in the design of the aliens and their ship. The Krotons, as realised on screen, did lead to a myth that they were the product of the Blue Peter Design a Monster competition (the one which Troughton helped to judge in 1967). Apparently there was a Spinal Tap moment when the prop builders got the height dimensions wrong - leading to the bottom half of the creature having to be realised with a skirt.
They have distinctive booming voices which have a trace of an Afrikaans accent (though some people think they're Brummies). The spinning "heads" did not feature in the script, so were the idea of director David Maloney. This is his second story, and he was reportedly much relieved when offered this instead of the Sharples story. His first story - The Mind Robber - introduced Bernard Horsfall to the series (as Gulliver), and Maloney would employ him on three further occasions. Here he introduces Philip Madoc to the show. He will re-employ him as well (in his next story). Madoc's previous brush with the series had been his role as the duplicitous black-marketeer in the second Peter Cushing Dalek movie. 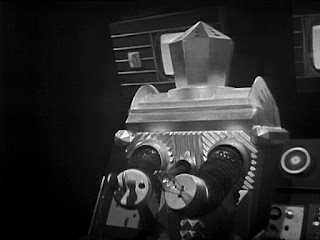 So, the idea of a civilisation being manipulated by an alien race who have come to be regarded as gods is not a new one. This is one of those "Pandorica" stories, where the TARDIS drops out of the skies and the Doctor upsets the entire social order in a single night. There haven't been too many of these in the series so far. The last one would have been The Macra Terror.
Here, the Doctor doesn't facilitate the changes single-handedly. He lets the Gonds know what is happening out of sight in the wasteland, which then prompts the younger elements of the society to rise up and rebel. I say younger, but these are clearly what you call mature students. We already mentioned the student riots of 1968 when looking at The Dominators. These would lend a topicality to Holmes' script, as would the whole idea of forced learning. The Gonds don't just learn from the machines, they are mentally conditioned to feel that their unseen benefactors are pleased with them into the bargain. One area which the Krotons don't want the Gonds to know about is chemistry, and weapons technology would also appear to be off the syllabus, as Eelek thinks slings and fireballs are up to the minute WMDs. 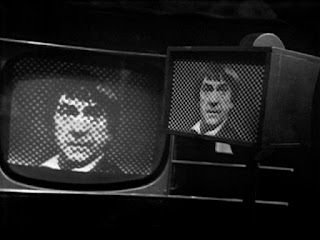 Considering that this story was first intended to be made for 1965, it is one of the few stories of the late Troughton era which actually reflects the times. Way back at the start we had Susan in her first episode portrayed as a with-it schoolgirl of 1963, digging John Smith and the Common Men on her transistor radio. Apart from some dialogue with Ping-Cho in Marco Polo, this side of her was dropped. The series preferred to concentrate on the mum and dad characters of Ian and Barbara after that opening episode. Ian may have known who John Smith & Co were, but he didn't appear to dig their music very much. Then there is his dad-dancing in The Chase. It was only with the arrival of Ben and Polly that the series started to reflect the times, with their opening story being set in contemporary London. Apart from the trip to the Tricolour coffee bar by the Doctor and Jamie in Evil of the Daleks, the series has tended to steer clear of reflecting the years in which it was made, though some Pop / Op Art imagery did creep into costume designs for the base personnel in The Ice Warriors, and the bunker dwellers of Enemy of the World. The attempted brainwashing of Medok in The Macra Terror had been a little trippy, and the scenes where first the Doctor and Zoe, and later Jamie, have their mental energy attacked in this story make use of distorted imagery. We'll only get really psychedelic stuff in the series once Barry Letts gets his hands on CSO, and is not afraid to use it.
Next time: it's the final monster show of the 1960's as the Ice Warriors get a return appearance.
Posted by GerryD at 19:41