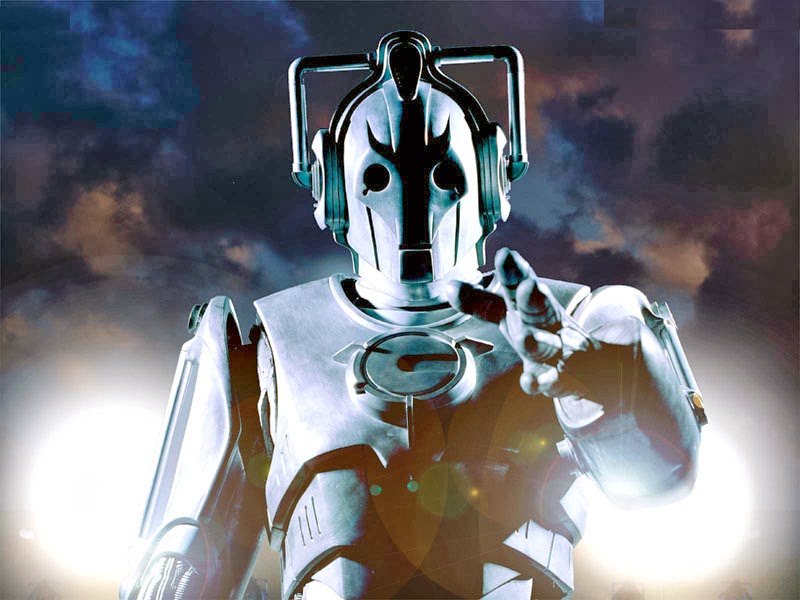 Rise of the Cybermen / Age of Steel.
The return of the Cybermen, in a redesigned form.
A new Cyber-controller.
A parallel Earth.
Return of Pete Tyler.
Departure of Mickey Smith as a TARDIS traveller.
In 2005, we got a glimpse of a Revenge-style Cyberman head in Van Statten's museum. That would be their only appearance in the first series. RTD knew to concentrate on the Daleks and not pour everything into the new series. There was a long term plan, which allowed for other classic monsters to be reintroduced over time. Having the Cybermen back in Series 2 meant a considerable amount of publicity.
Whilst the basic design of the Daleks was sacrosanct, the Cybermen had rarely enjoyed two consecutive stories looking the same. As such, the design team could do what they wanted with them - within reason. The new design had to include the handlebars, for instance. RTD also wanted a move away form "silver" to "steel" - emphasising their strength and coldness (physical and emotional).
Rather than have to explain their rather complex continuity (with two home planets etc), it was easier to do an origins story - and set it in a parallel universe.
This is only the second parallel Earth seen in the history of the programme. Apart from a preponderance of airships, this world is very like our own. John Lumic's Cybus Industries is a powerful financial conglomerate, involved in everything from broadcasting to real estate to soft drinks. One of their subsidiaries, in a little nod to the past, is International Electromatics.
It's a pity they chose to put Lumic in a wheelchair - making a too obvious parallel with Davros.
Rose is reunited with her dead dad Pete - or rather she meets a successful alternative version of her dead dad. The Doctor will go on to term this parallel Earth "Pete's World". Mickey elects to stay behind here - fed up of playing gooseberry to the Doctor and Rose, and because his old gran is still alive here. He also sees the chance to have some meaningful purpose here - stopping the further rise of the Cybermen with Jake.
Of course, little did we know just how significant Pete's World would be in RTD's grand scheme for the programme.
Posted by GerryD at 19:07