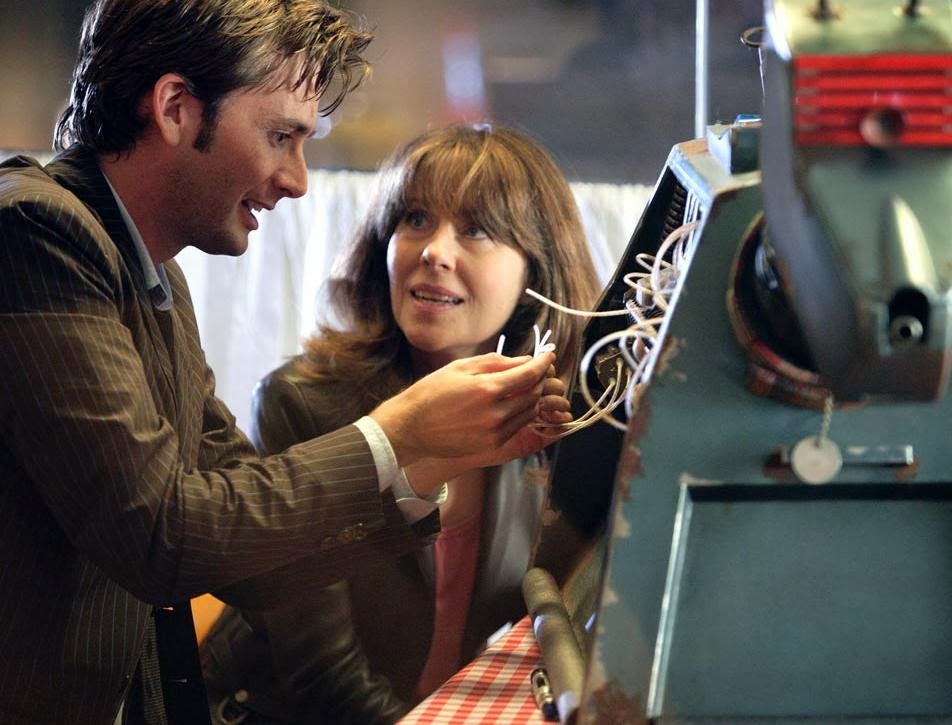 School Reunion.
The return of Lis Sladen as Sarah Jane Smith - and what will be the launching point for the second Doctor Who spin-off series - The Sarah Jane Adventures.
The return of K9 - voiced once again by John Leeson.
Mickey Smith becomes a full-time companion - the first black companion in the history of the TV series.
A lovely little stand alone adventure that is shot through with nostalgia. If they were going to bring one companion back it could only be Sarah Jane Smith. She had made that rather dreadful K9 pilot - which was canonised by the inclusion of K9 in her opening scenes for The Five Doctors. JNT had asked her to return to the series to bridge the Baker / Davison regeneration. (He also tried to get Louise Jameson).
Despite the great advances in technology since he was last on TV, K9's innards had not been updated that much and he continued to crash into things on set.
Everyone who worked on the programme during K9's era spoke of how much fun it was to have John Leeson present at rehearsals. It was the only thing that made the creature even remotely bearable to Tom Baker.
Sadly, new TV production methods meant that Leeson was never present during the filming of this story. He voiced everything in a London studio later.
Sarah Jane suggests that the TARDIS needs a Smith on board - but it is Mickey who gets offered the chance to become a fully fledged companion and not just a recurring character. Such a pity it was to be only for a couple of trips.
Posted by GerryD at 19:15