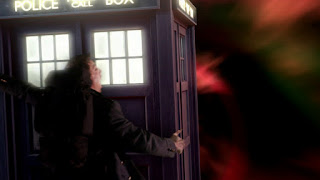 In which the Doctor takes the TARDIS to Cardiff so that it can refuel itself from the rift in space / time which runs through the city. It materialises in the plaza above the Torchwood Hub. The Doctor spots a familiar figure running towards the ship - Captain Jack Harkness. He quickly takes off again, but the ship goes wildly out of control. It hurtles through the Vortex - with Jack clinging on to the exterior.
The TARDIS comes to land in a barren rocky wilderness, 100 Trillion years in the future. Emerging from the ship, the Doctor and Martha see Jack lying on the ground. Martha fears he has died, but the Doctor seems nonchalant about this. Jack suddenly wakes as Martha gives him the kiss of life. They are on the planet Malcassairo, at the very end of the universe. The Doctor points out the starless night sky and explains it isn't really night - all the stars have now burnt out. Jack tells the Doctor of how he read about the disappearance of Rose Tyler and her mother, and the Doctor assures him they are well. Jack explains that he used his vortex manipulator to leave the Game Station and it took him to 19th Century Earth, where it burned itself out. He then waited around until the Doctor returned. 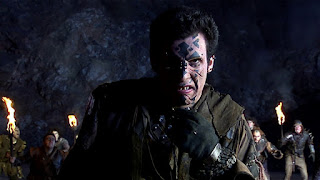 They see the ruins of a vast city built into a ravine, and then spot a man being chased across the landscape. They rush to help him. The man - Padra - is fleeing from a pack of savage humanoids known as the Futurekind. They are cannibals, who are a degenerated branch of the human race. Padra leads them to safety at a compound called the Silo. Armed guards chase off the Futurekind. Inside the compound they discover the last remnants of the human race, gathering in preparation for departure in a huge rocket. They are met by an elderly scientist - Professor Yana - who had learned that one of the newcomers was called the Doctor. He hopes that a fellow scientist can help him with his work. Yana is assisted by a blue-skinned insectoid being named Chantho, last of the native Malcassairo people who once inhabited the ruined city they had seen. The Professor explains to the Doctor that he has invented a means to launch the rocket, but he cannot get it to work. The humans have discovered a signal emanating from somewhere in space, which they have dubbed "Utopia". It is believed that more humans have settled there, and there is a chance for the race to survive if they can join them. 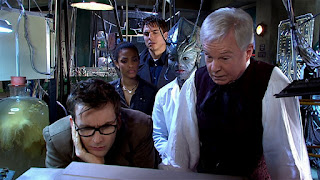 Jack reveals that he has the Doctor's hand in a capsule in his rucksack. He claims it was his "Doctor detector", having reacted when the TARDIS landed in Cardiff. Jack is electrocuted but returns to life moments later, to the Professor's amazement. He seems distracted by the newcomers' conversations, and tells the Doctor that he is weary, and plagued by an incessant drumming sound in his head. He has had it since he was a child, but it is getting worse. He tells the Doctor that he does not intend to go with the others, and Chantho is so loyal she will remain behind as well. The Doctor helps Yana, and the rocket is soon ready for launch. Some reactor rods need to be inserted into a chamber beneath the vessel before it can take off. One of the Futurekind has broken in, and she sabotages the power systems - killing the man who was operating the rods. The chamber is flooded by deadly radiation, but Jack volunteers to go in. The Doctor tells him why he rushed away from Earth, and why the ship brought them here. Jack's immortality make him "wrong". He should not exist in the universe, and this is why he - and the ship - ran away from him. Martha discovers that the Professor has a fob watch identical to the one which the Doctor had used when he made himself human, part of the Chameleon Arch. He explains that he has always carried it even though it is broken. Martha rushes to the radiation chamber to tell the Doctor that the Professor might be another Time Lord... 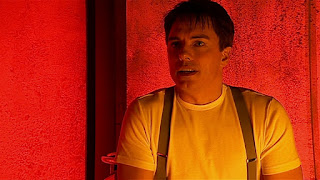 Martha reminds the Doctor of the Face of Boe's dying words - that he was not the last of his kind. The initials of "You are not alone" spell out YANA. She and Jack are pleased for him, but he seems concerned. It depends which Time Lord... The rocket blasts off. The Professor hears voices in his head, talk of Time Lords, TARDISes and regeneration resonating in his mind. He opens the fob watch and his Time Lord essence is restored. He informs Chantho that his name is not Yana. It is the Master. He attacks her with a live electrical cable, then sets about opening up the Silo so that the Futurekind can gain entry - intending to make his own escape in the TARDIS which had earlier been brought into the compound. He takes the Doctor's hand and places it onboard, also removing the information about Utopia from the computer. As he is about to leave, the fatally wounded Chantho shoots him. Dying, he staggers into the ship and locks the doors as the Doctor, Jack and Martha rush into the laboratory. In the TARDIS, the Master regenerates into a younger man. He speaks to the Doctor, telling him who he is, and Martha finds his new voice strangely familiar. The Doctor uses his sonic screwdriver to lock the ship's controls, so that it can only travel to one destination. The ship dematerialises, as the Futurekind attempt to smash their way into the lab where the Doctor and his friends are trapped... 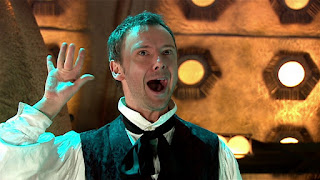 Utopia was written by Russell T Davies, and was first broadcast on 16th June, 2007. It sees Captain Jack rejoin Doctor Who, and re-introduces the character of the Master for the revamped series. Davies had a long term plan, in which the Daleks would be used in Series 1, with the Cybermen returning for Series 2. The Master would then be brought back for the third season. Jack's return to the parent programme had also been well planned in advance.
The story acts as a lead-in to the subsequent series finale, and some have chosen to accept it as the first episode of a three-part story. I prefer not to do this myself, as this has a different director to the last two episodes (Graeme Harper here, and Colin Teague for The Sound of Drums / Last of the Time Lords).
For only the second time in the programme's history we see a regeneration that isn't the Doctor's - the first being K'anpo / Cho-Je's in Planet of the Spiders. 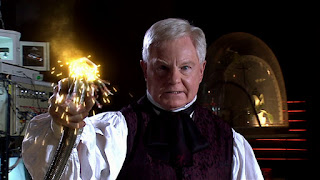 The Doctor has claimed since The End of the World that he was the last of the Time Lords. He told Rose then that he would have known in his mind if another had survived. It transpires that he failed to sense the Master because he had used a Chameleon Arch to make himself human - just as the Doctor had earlier done this series when attempting to evade the Family of Blood. The Face of Boe had told him that it knew a secret about the Doctor back in the hospital ward in New Earth. and this was revealed in Gridlock the following year, when the Face told him "You are not alone". And the Professor's name is Yana. He even mentions adopting his title - an academic title - in the same way that the Doctor and Master affected theirs. The Master's return has therefore been seeded through the programme for some considerable time.
Playing him first of all, in his Yana form, we have Sir Derek Jacobi. A big fan of the show, he had once claimed that his ambitions were to get a part in this and Coronation Street. His good friend Sir Ian McKellen had managed to get a role on the Street, but had yet to make his appearance on Doctor Who (voicing the Great Intelligence in 2012). Jacobi had played the Master once before - voicing the character in The Scream of the Shalka animation. For Big Finish he had played an alternative Doctor of sorts - the man who had devised the character then come to believe he was him.
As the Master himself states, if the Doctor can be a younger man then so can he - and so he regenerates into John Simm. Simm was another fan of the show, watching it with his son. He had recently been in the public eye thanks to the role of Sam Tyler in Life on Mars. His character's surname had come from Rose Tyler. 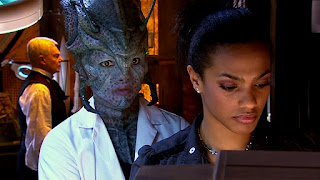 Playing Chantho, under heavy prosthetics, is Chipo Chung. She will return in the following series, sans make-up, as the Fortune Teller in Turn Left. The leader of the Futurekind is Paul Marc Davies. He will appear three times as the Trickster in The Sarah Jane Adventures, and recently played the Shadowkin King, Corakinus, in Class.
One other role of note is the little boy who works in the Silo - Creet. He is played by John Bell, who won the role in a Blue Peter competition. If you've read my A-Z entry for Creet, you'll know the success he has had since, appearing in some big blockbuster movies.

Story Arc: No mention of Mr Saxon, actually, though Martha recognises the new Master's voice. The link won't be made explicit until the next episode.
We've already mentioned the Face of Boe's cryptic sayings above.
It was in The Christmas Invasion that the Doctor lost his hand, and the Torchwood opening story - Everything Changes - established that Jack had found it and kept it in a capsule in the Hub.
Jack disappeared in the closing episode of Torchwood Series 1 - End of Days - soon after hearing the TARDIS and seeing the hand become animated. 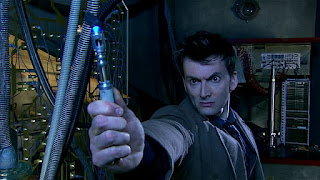 Overall, it is an episode which rattles along at a fair pace, as you expect from the ever reliable Graeme Harper. Fans had a good idea of what was coming, but the scenes where Yana comes to realise his true identity are a highlight of the season, accompanied by a great Murray Gold score. Great to see the witty, flirtatious Jack back again, after the dour Torchwood version. This came 55th in the DWM 50th Anniversary poll, but they chose to join it with the next two episodes. I would have liked to have seen how it fared if left to stand alone - higher I suspect.
TYMLTK (Things you might like to know):

Email ThisBlogThis!Share to TwitterShare to FacebookShare to Pinterest
Labels: Series 3