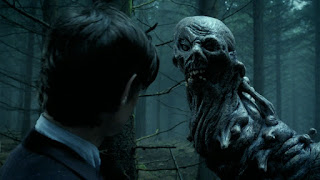 A misshapen creature whose origins are unknown, it was discovered by the Doctor lurking in a forest in a pocket universe which was slowly disintegrating. The creature also seemed to be haunting Caliburn House in the 1970's, along with another entity known as the Witch in the Well. The Doctor found that the latter was really the image of a time-traveller named Hila Tacorien, trapped in the collapsing universe. He passed through a portal and rescued her - leaving the Crooked Man behind. Once he had returned to Caliburn House, he saw the creature at a window and realised that there were actually two of them - trapped on either side of the portal. He returned to the pocket universe and rescued the other so that they could be reunited.