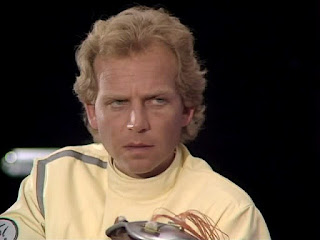 A brilliant neurosurgeon who was employed by the Mentors of Thoros Beta to save the life of their leader, Kiv. Kiv's brain was outgrowing his cranium and the Mentor Sil had sought his help in performing an operation to transplant it into a new body. Kiv had given instructions that, were the operation to be a failure and he to die, both Crozier and Sil would forfeit their own lives. Crozier was ruthless in his ambitions, and completely lacking in ethical standards. He was prepared to experiment on captured Thoros Alphans to find a new host body. One experiment had been to augment a sea creature called the Raak. This failed when the creature reverted and attacked the Doctor and Peri. Crozier did not accept his failure at first, and interrogated the Doctor using a mind conditioning device he had perfected.
Crozier was able to carry out a temporary operation on Kiv after a compatible body had been found, but he knew that this would give them only a little respite. He then realised that his machine could be used to transplant Kiv's mind rather than his brain - so any body could be used. He decided to make Peri the new host for Kiv's mind. The High Council of the Time Lords decided that his work threatened the whole of creation as he could essentially make everyone immortal. They removed the Doctor from time, taking him to a space station to face an inquiry, thus leaving King Yrcanos to attack Crozier's laboratory - killing him along with Kiv and Sil.
It later transpired that the images of the deaths witnessed by the Doctor at the inquiry were faked, and that Peri had been saved before Crozier had destroyed her mind.