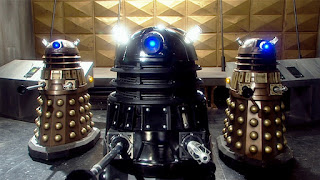 The Cult of Skaro was a quartet of Daleks who were tasked with helping to win the Time War. Created by the Emperor, they were given authority to act independently - answerable to no-one. Their job was to think differently to other Daleks. They gave themselves names and adopted individual identities. In command was Sec, who had a black casing. The others were Thay, Jast and Caan.
As well as devising new strategies to win the war, the Cult also planned for the survival of their species. They came into possession of a captured Time Lord prison capsule, which contained thousands of Dalek prisoners. They dubbed this the "Genesis Ark" as this could be used to unleash a whole new army of Daleks should the war go against them. They took the Ark into a Void Ship and fled the war. The Void was the space between universes, where time and space did not exist.
A rift in space / time was identified by the Torchwood organisation high above London's Docklands, and a tower was built to encompass it. The Void Ship came through the rift. Torchwood were unable to analyse it, as it could not be measured in any way. 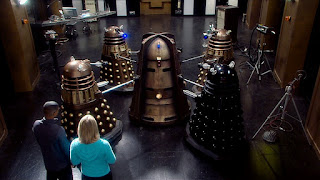 When the Cybermen crossed over from a parallel Earth, the vessel opened and the Cult of Skaro emerged, taking Rose Tyler, Mickey Smith and Dr Singh prisoner. They drained Singh's mind in order to update themselves on the current situation, learning of the Cyberman invasion. Sec declined an offer of an alliance with the Cybermen. The Doctor was surprised to meet them, as he thought that the Cult were just a legend.
They needed someone who had travelled in time to open the Ark, as it only responded to Artron Energy. Mickey accidentally gave the device this contact. The Ark opened and thousands of Daleks emerged over London. The Doctor knew that anyone or anything which had passed through the Void had picked up a form of radiation there. By opening the rift fully, they would be sucked back into it. He and Rose did this, but the Cult of Skaro used an emergency temporal shift to take themselves out of danger. 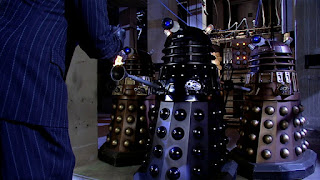 They travelled back through time to New York, in the early 1930's. Using a man named Diagoras, they infiltrated the construction of the Empire State Building. As the only four Daleks left alive they had to find a way to survive. Dalek Sec devised a plan to create a new race of Human-Dalek hybrids. Genetic experiments were conducted to turn some captive humans into pig-people, who would then be used to abduct homeless people from the city. These people had their minds wiped, awaiting new Dalek consciousnesses. Dalek Thay sacrificed some of the panels from its skirt section so that these could be attached to the mast at the top of the tower. A gamma radiation storm was predicted to strike the planet, and this radiation would be channeled down into the sleeping humans to trigger the genetic alteration. 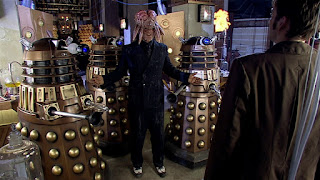 Sec embarked on another experiment - genetically combining his body with that of Diagoras. He emerged from his casing as a hybrid of man and Dalek. Sec recognised that humans always survived whilst his race were defeated, and he wanted to learn from humanity what made it so resilient. The other members of the Cult were unhappy with this development. Sec was no longer racially pure, and he was showing signs of weak human emotions. They rebelled against him and took him captive. The Doctor got in the way of the gamma radiation burst, so that the army awoke with aspects of his personality instead of pure Dalek beliefs. Dalek Caan remained at their base beneath the tower, whilst the others took Sec and the Dalek-Human army to a nearby theatre to kill the Doctor. Sec sacrificed himself to save the Doctor, and the army turned on the Cult - destroying Thay and Jast. Caan self-destructed the army. The Doctor went to confront it - the last of the Daleks in existence. He offered to help it, but Caan used the emergency temporal shift to escape once again. 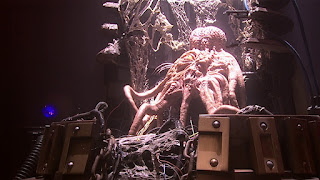 Even though it was supposed to be time-locked, meaning nothing could leave or enter, Caan broke into the Time War and rescued Davros just before his command ship was destroyed by the Nightmare Child. The effort smashed open Caan's casing and left him insane. Davros created a new breed of Daleks using genetic material from his own body. The Supreme Dalek had Caan and his creator locked away together in a vault on their command ship - the Crucible - where Davros set about developing the Reality Bomb. This would destroy everything in the universe apart from the Daleks. Caan had developed the powers of prophesy. Though judged an abomination by the Supreme and by Davros, his pronouncements were nevertheless heeded. He foresaw the coming of the Doctor and his companions - the Children of Time - and of how one of them would die.
However, Caan had his own agenda. He now saw his own kind as evil, and he had engineered the destruction of the Davros' new empire. The last member of the Cult of Skaro was destroyed when the Crucible exploded.

Email ThisBlogThis!Share to TwitterShare to FacebookShare to Pinterest
Labels: A to Z, Daleks