C is for... Cranleigh 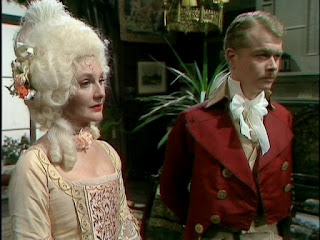 The Cranleigh Family had comprised eldest son George, who was a noted botanist, his younger brother Charles, and their mother Lady Cranleigh, who was known as Madge to her friends. George embarked on a trek to South America to look for the fabled Black Orchid. He found it, but was captured by the local tribe, who tortured him, physically and mentally. He was rescued by Latoni, chief of a rival tribe. Latoni smuggled George back to England, where he stayed on to look after him in a locked-off wing of the family home. The family ensured that it became known that George had died on his expedition, and Charles inherited the title as Lord Cranleigh. He also took George's fiancee Ann Talbot for his own bride to be. 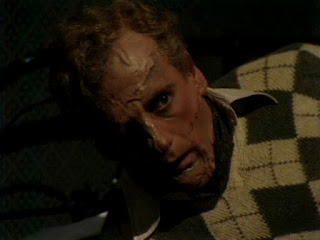 When the Doctor and his companions visited the area in 1926, it was discovered that Nyssa was the exact double of Ann. As a prank they decided to wear the same costume at a forthcoming masque-ball. George escaped and murdered one of his attendants. The Doctor discovered the corpse after becoming lost in the house's secret passageways. By the time he brought Lady Cranleigh to see the body, Latoni had removed it. George, meanwhile, had donned the Doctor's harlequin costume and gone downstairs, where he attacked Ann and killed the butler. George was recaptured and put back in his room, whilst the Doctor was accused of the attacks. George escaped once more, this time killing Latoni, who manged to put the key to the bedroom door out of reach before he died. George set fire to the door in order to break through it, and this set light to the house. He seized Nyssa, mistaking her for Ann, and they became trapped on the roof. Charles climbed up and convinced George to let Nyssa go. He then panicked and fell to his death. The Doctor and his companions stayed on for his funeral, and the Doctor was gifted a copy of George's book - Black Orchid. 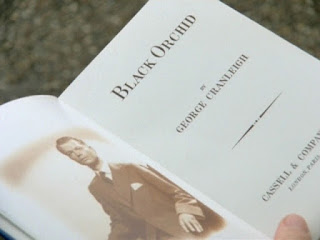