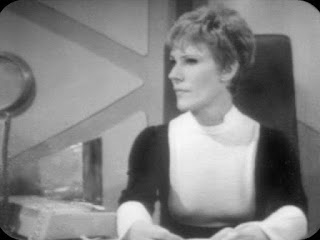 Chief medical officer on Station W3 in Earth orbit in the late 21st Century. She was responsible for the psychological as well as the physical health of the crew. Gemma was a widow, her husband having died in an accident in the asteroid belt some years before. She took care of the Doctor when he and Jamie were found on the drifting Silver Carrier spaceship. She quickly sensed that Jamie was not being honest in his explanation of how they came to be there, and spotted immediately when he used a name off of a piece of medical equipment to give the Doctor a name. As strange events began to occur on the station - known simply as The Wheel - Gemma became increasingly alarmed that her friend, the station commander Jarvis Bennett, was becoming mentally unwell. He had always been rather obstinate in his ways, but his refusal to accept rational explanations for the occurrences alarmed her. The Doctor became firm friends with her, and she accepted his warnings that the Cybermen were infiltrating the station. She assisted with the Doctor's plan to prevent the crew being mentally subjugated by the Cybermen. She found out that the invaders were going to poison the station's oxygen supply and was able to warn the Doctor, but at the cost of her own life. Her death prompted Bennett to make a suicidal attack on the Cybermen. It was clear that he had deep feelings for her, beyond their professional relationship - feelings she may well have shared.