Inspirations - The Faceless Ones 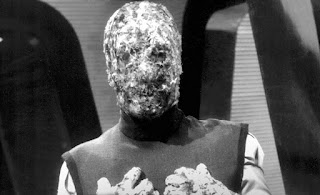 This story finally sees Malcolm Hulke get his name in the opening credits of a Doctor Who, though he has to share them with David Ellis. Hulke's name featured frequently back when the series first started, as he had a proposal for something that might have been called "The Hidden Planet" under consideration for the first season. This same story idea may also be the one known as "Beyond the Sun", as it featured a planet identical to Earth, but with some things in reverse, and which had Barbara Wright's double as its leader.
That story never did make it to the screen, although it sounds a bit like Gerry Anderson's Journey to the Far Side of the Sun (aka Doppelganger).
One element that does seem to have found its way into The Faceless Ones is the idea of doubles. This story features a new race of aliens who are known as the Chameleons, who have lost their physical identities in what is described as a "galactic explosion". From their lumpy, unformed features, it looks as if they are the victims of some kind of radiation mutation. Their idea to get round this is to travel to Earth and abduct thousands of young humans, keeping them miniaturised and in suspended animation whilst they take on their physical appearances, as well as their personalities. The process requires the humans to be kept alive, otherwise the Chameleons end up a puddle on the floor. 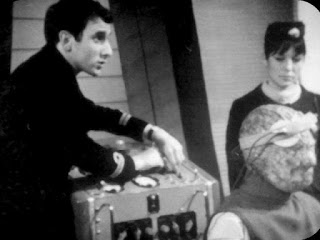 The initial story idea was called "The Big Store", and the action took place in a large high street department store. This had been infiltrated by aliens who came in two factions. There were human-looking ones known by a number, and some cruder types known by a letter. During the day, the crude ones were disguised as shop window mannequins. Hulke may have told his lodger, Terrance Dicks about this storyline, and he later told Robert Holmes - though Holmes may have just come up with the Autons all on his lonesome. The idea of shifting the action to an airport may be a leftover from one of the early Troughton scripts which failed to make it to the screen - William Emms' "The Imps", which was set in a spaceport.
Presumably the aliens do not actually call themselves Chameleons all the time - otherwise it would be a mighty big coincidence. They certainly have an airline set up, which specialises in cheap flights for young people, and this is called Chameleon Tours. In an earlier draft, it was Pied Piper Tours - as in they lure young folk away. 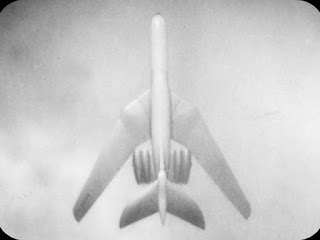 When discussing the previous story, we looked at the holiday camp option for cheap, affordable family holidays. The first organised foreign tours had been organised by Thomas Cook back in the mid 19th Century, but in 1950, the Horizon Holiday Group arranged the first of what we now think of as package holidays - flying out of Gatwick to Corsica. These package deals meant that the flights and hotel booking were all handled and paid for together. Similar deals were then launched by the company to Palma in 1952, Lourdes in 1953, and to the Costa Brava and Sardinia in 1954. There's no mention here of Chameleon Tours offering any form of accommodation (they wouldn't need to, as no-one is going to be staying there), and all their destinations appear to be short-haul European city breaks, so they are more like the budget airlines we have today. Chameleon Tours also seem to be foreshadowing the Club 18 - 30 type holidays, as they are aimed primarily at young people.
The original plan had been to film at Heathrow Airport, but this was refused and eventually London's second international airport at Gatwick was agreed upon. This turned out to be a good move as it wasn't quite so busy as Heathrow. Back in 1967, airports were still mysterious, glamorous places, and the production team got their monies' worth with lots of shots of Jamie wandering around the Terminal building in the earlier episodes.
"The Big Store" had been an alien invasion story, but here the Chameleons only want to take people away and steal their likenesses. To do this they have infiltrated the airport, replacing key figures such as Nurse Pinto and the Air Traffic Controller, Meadows. Presumably they did not go to the bother of setting up their own airline from scratch, and the Tours personnel have also been doubled as a job lot. This infiltration scenario is not dissimilar to certain spy features, where the Russians replace people in an out of the way community and they have to learn how to speak and act like them in order to become sleeper agents. Take as an example the first of the Emma Peel Avengers episodes, The Town of No Return, or the Danger Man episode Colony Three - though in the case of the latter story, the town is a replica one behind the Iron Curtain. 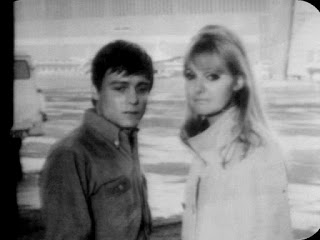 This story sees a number of notable departures. Behind the scenes, it is the last story to be worked on by Shawcraft Models, who had been handling visual effects work since the TARDIS console in the very first episode. They provided the aircraft whose wings fold back so that it turns into a space-going vehicle, but problems arose with the massive space station model. This proved too heavy to be hung and broke its strings. The internal lights also failed, and Shawcraft were slow to replace them. The decision was made to bring the VFX in-house from the next story, now that the BBC VFX unit had more staff and facilities than they had when the series first launched.
On screen, we have the departure of Anneke Wills and Michael Craze. The decision was taken to write out Ben now that Jamie was proving popular and Frazer Hines was getting a lot of fan mail. He was due to leave after the first two episodes of the following story, but the departure was brought forward to this story instead. Wills was invited to stay on, but was unhappy at Craze's axing, and thought that she might be tempted to stay on too long and so face type-casting. She therefore decided to leave with Craze. Both were paid up until the episode when they were originally due to depart. Both actors only feature in the first half of the story, after which they get abducted by the Chameleons - with Wills playing her Chameleon double for her last full episode. Both reappear to make their farewells to the Doctor and Jamie at the conclusion, in a scene filmed before the studio recordings - so shown after they had already left.
The reason given for their departure is that they have discovered that this is the same day when they first entered the TARDIS back in Fitzroy Square - July 20th 1966. This mean that the events at Gatwick have taken place concurrently with the WOTAN / War Machines incident only a few miles away in London - yet nothing of this is ever mentioned. Assuming that it takes some time for Ben and Polly to be returned to Earth, we also have the possibility that the First and Second Doctors could have spent some time in close proximity to each other - and maybe even met. 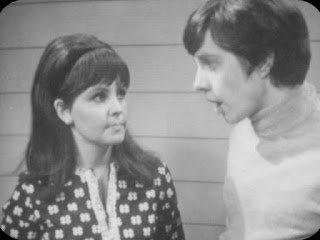 The departure of Ben and Polly naturally leaves a vacancy in the TARDIS for a female companion. In this story we have Samantha Briggs. This character was originally given the name Cleopatra. She is played by Pauline Collins, and - according to Frazer Hines - he and Troughton approached the production team to enquire if she could be kept on. They replied that they had already had the same idea, but Collins was not interested in tying herself down for at least a year on a TV show. Collins uses her broad Liverpudlian accent as Sam, and it should be noted that less than a year ago Jackie Lane was being asked to tone down her Northern accent. We're also about to get two companions who both hail from before the 20th Century - something which the previous Producer / Script Editor had thought a bad idea.
Next time: the Daleks are back for the very, very last time ever (honest), and we finally get that new female companion. And hold on to your hats because they are about to start playing musical chairs behind the scenes.
Posted by GerryD at 23:21