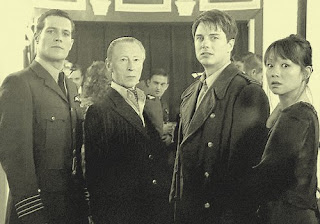 In which Jack and Tosh go to investigate reports of ghostly sounds coming from an abandoned dance hall. Neighbours have reported hearing music coming from the venue. As they look around, Jack and Tosh hear the music - playing tunes from the big band era. They suddenly experience a time slip and find themselves in the hall as it was in 1941. There is a dance on, and the room is full of RAF personnel and other military people. When one of the RAF men takes exception to Tosh, his commander steps in to calm the situation. He introduces himself as Captain Jack Harkness. Jack hurriedly renames himself "James Harper". He reveals to Tosh that this is the man whose name he took, as the mission he will fly tomorrow will be his final one. Realising that the others will come looking for them, they decide to leave a message that might survive to the 21st Century. They must work out a way of opening the Rift in order to get back to their own time. The dance hall manager, Bilis Manger, takes a photograph of them with an instamatic camera. 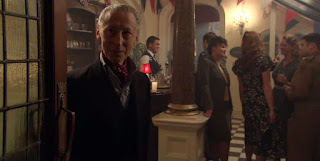 In the present day, Gwen goes to the dance hall in order to look for them as they cannot be contacted. She finds their vehicle parked outside. Within, she also catches faint hints of the wartime era music. When she calls out for them, Jack and Tosh can briefly hear her. Gwen meets the caretaker of the hall - Bilis Manger, looking exactly the same as he did back in 1941. Back at the Hub, Ianto and Owen try to operate the Rift Manipulator. Ianto has reservations, as failure to operate it properly could devastate the city. Owen wishes to push ahead regardless of the risks. However, they find that a vital component of the device is missing. They inform Gwen after she reports seeing the faded photograph of her friends, with the same man she has just met. Gwen suspects that he might be some kind of time-traveller, and may have stolen the component, so she starts to search for it.
Back in 1941, an air-raid begins and everyone seeks shelter in the cellars. Tosh writes down the equation needed to open the Rift and photographs it using Manger's camera. This is hidden in a tin which is placed in a cupboard, and a message is left on a card in an electrical junction box just outside the hall. Manger deliberately erases part of the equation. 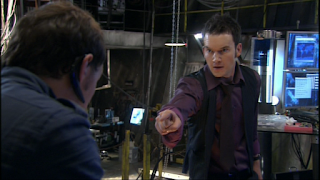 Jack discovers that his namesake is attracted to him, and he seems to have worked out that he does not have long to live. Gwen finds the messages from Tosh and informs Owen and Ianto. She also finds the missing component hidden in an old clock. In the Hub, Ianto and Owen begin to fight over the opening of the Rift. Ianto holds a gun to Owen but he carries on working. Ianto shoots and wounds Owen, but his colleague goes and ahead and activates the Manipulator. In the dance hall, the assembly is shocked to see Jack and the real Captain dance together. As the Rift opens they kiss. Jack and Tosh pass through the Rift to return to the 21st Century.
Back at the Hub Jack agrees with Ianto that Owen may have caused all manner of problems in opening the Rift in the way he did. He and Tosh raise a glass to toast the real Captain Jack Harkness, who died on a training flight the day after the dance. 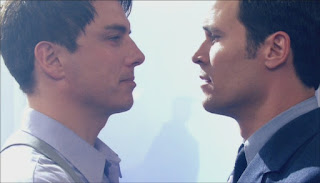 Captain Jack Harkness was written by Catherine Tregenna, and was first broadcast on 1st January, 2007.
The dance hall scenes are set on 21st January, 1941, making these some three and a half months before Jack appeared in London to meet the Doctor and Rose Tyler in The Empty Child. We get to meet the man whose name Jack adopted. In many ways this could be seen as the first half of a two-part story, as this episode and the next feature the enigmatic Bilis Manger, and events in the following story come about because of Owen's actions here. Owen's mental deterioration continues here as he recklessly opens the Rift without thinking of the consequences, is abusive towards Ianto, and eventually drives his colleague to shoot him.
It is one of the only episodes of the first series to really highlight Jack, as he enters into a brief and doomed romance with his namesake, as well as being a strong episode for Tosh. who - along with Ianto - is normally sidelined. 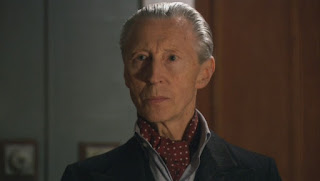 Playing Bilis Manger we have Murray Melvin. He began his acting career under Joan Littlewood, and came to the public's attention when he played Geoffrey in the play, and later film adaptation, of A Taste of Honey. Later film work saw him act in roles for Ken Russell and Stanley Kubrick. Matt Rippy plays the real Captain Jack Harkness. Playing George, the RAF crewman who almost starts a fight with Jack, we have Gavin Brocker, who appears in the Sarah Jane Adventures story Sky. 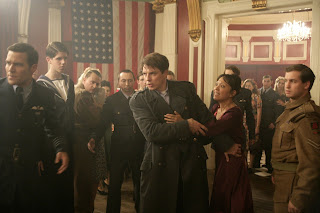 Overall, a lovely episode with a great performance from Melvin. There's something obviously bad about him, but he is not an out and out villain here. Everyone gets to do something in this episode, but at its heart there is that bittersweet romance between Jack and Jack.
Things you might like to know: