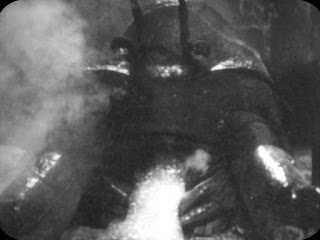 The monsters for Ian Stuart Black's third and final story for Doctor Who changed throughout the scripting process, as one early title called this "Doctor Who and the Spidermen", and another was "Doctor Who and the Insect-Men". This confusion seems to have seeped into the finished programme, as the Macra are referred to as insects and even bacteria at different points. On screen, however, when you can actually see them in all the gloom and the smoke, they are clearly massive crabs. The clearest view remains the 8mm footage of the Shawcraft Models workshops, which appears as an extra on The Chase DVD. Only one was ever built. It was massive, and cost the same as a family car. The size, and the lack of maneuverability, doomed them to be one-hit wonders, until the advent of CGI.
Giant insects or other mutated creatures remind us instantly of the Science Fiction movies of the 1950's. One in particular - Roger Corman's Attack of the Crab Monsters (1957) - is worth a look. Not only are the crabs of comparable size to the Macra, but they are also more than merely animals. They ingest the minds of their victims along with their bodies, and so gain great intelligence.
The name "Macra" may derive from the Latin name for the giant Japanese Spider Crab - Macrocheira Kaempferi. It has the biggest leg span of any arthropod. 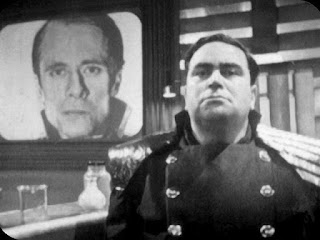 The location for this adventure is known simply as the Colony. We had our first visit to an Earth colony only a couple of stories ago. This one is run along the lines of a holiday camp. After the Second World War a number of military camps around the coast of Britain were bought up by Billy Butlin, who had opened his first inexpensive holiday camp in 1936. People had more income and more leisure time, but cheap foreign travel had yet to take off. Rather than stay at a hotel in one of the big resorts like Blackpool you could have an all-inclusive holiday in simple chalet accommodation, in a camp with its own entertainment centre. There were strict rules - making some people compare them to POW camps. These days you would be arrested and reported to Social Services for leaving a small child alone in a chalet whilst you supped beer and danced, but it was the done thing in the early days of the holiday camps. A sign would be put up if a baby was heard to be crying in one of the huts. The entertainments ranged from the usual music and comedy acts to participatory activities - such as beauty pageants and knobbly-knees competitions.
In the Colony, music seems to be the big thing. There are endless jaunty jingles to encourage the workers, and we see a majorette troupe and preparations for a dance contest.
For many years the BBC banned jingles on the radio, as they were felt to be a form of brainwashing. The pirate stations used them a lot. Note the way Kenny Everett used them when he was given his "radio show" on TV.  During the Second World War and through into the 1960's, however, the BBC had broadcast Workers' Playtime, and Music While You Work, as it was felt that light music did aid productivity, as well as taking people's minds off their repetitive work. More on the subject of brainwashing below.
The people in charge are clearly the descendants of the crew of the spaceship which brought the colonists here from "the Earth planet" - having titles like the Pilot. 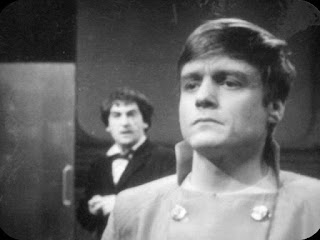 Like Corman's crab monsters, the Macra are parasites. Rather than feed on the humans, they have taken the Controller hostage and have mentally conditioned the colonists to work for them - mining a gas which they thrive on. It is never specified if the Macra were native to this world, or have infiltrated it along with other planets. Gridlock seems to say that they were established on a number of planets before they devolved. The 2007 story goes some way to exonerate the Doctor, who appears to gleefully commit genocide here.
The Macra condition their victims whilst they sleep, making them not only glad to work for them, but making them blot out the Macras' existence all together. There are no Macra here. The Macra do not exist. Brainwashing came to the fore in the 1950's, when people questioned how the Chinese seemed to be able to get people to admit to all sorts of things. People who had been opposed to the Maoist regime suddenly became loyal party members. During the Korean war, a number of POW's appeared to speak out against their own government. The phrase first saw print in a Miami newspaper in September 1950. Later, the phrase would come to be used to describe the techniques used by some religious cults to recruit and retain members.
The Manchurian Candidate - published in 1952 and made into a movie ten years later - features brainwashing of prisoners, being made to carry out an assassination. George Orwell's novel 1984 also features psychological torture techniques being used to make people conform. This book, and especially its critically acclaimed BBC adaptation, gives us the image of the Controller's face on large screens - like that of Big Brother. 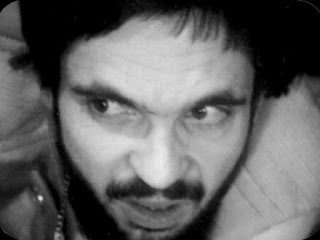 In one scene here we see the Pilot and his Chief of Police, Ola, attempt to condition Medok, who has seen the Macra and is prepared to warn everyone about them. This fails, as his previous conditioning has obviously also failed. The Doctor prevents Jamie and Polly from being taken over, but is not so lucky with Ben, who is made into a loyal puppet of the regime and is prepared to denounce his friends to the authorities when they break the rules.
Ola seems to have been inspired by Lavrentiy Beria, Stalin's feared head of security, though he looks more like Georgy Malenkov, the man who succeeded Stalin. Coming between Stalin and Khrushchev, his two years in power are almost forgotten now.
Something else which might have been on Black's mind when he came to write this are the works of Franz Kafka. Bearing in mind that the Macra weren't always going to be specifically crab-like, we have Metamorphosis, where a man's psychological alienation leads him to transform into a beetle. Other works, such as The Castle and The Trial deal with the stultifying effects of bureaucracy. It is no mere coincidence that the man in charge of the mines is named Officia. The Colony has its rules, which are never to be broken, until the Doctor comes along and baldly states that bad rules were made to be broken.
Next time, we're off to the airport to wave goodbye to Ben and Polly. Everyone will be seeing double, as we find out that two different menaces have been operating in the London region at the same time. (And it will be three by the next story).
Posted by GerryD at 23:38