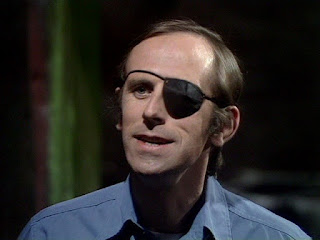 Guy Crayford was the chief astronaut with the British Space Defence Agency, which was based outside the village of Devesham. Sarah Jane Smith had reported on his disappearance, when contact with his ship had been lost near Jupiter. It was assumed it had been struck by an asteroid and destroyed. Crayford had actually been abducted by the alien Kraals. They brainwashed him into believing that they had saved his life, rebuilding his body save for one of his eyes, and repairing his vessel. Chief scientist Styggron then used his brain patterns to recreate Devesham, the Space Defence complex and its environs on their home planet of Oseidon. These were populated with android facsimiles of the real base personnel and villagers, including members of UNIT such as W.O. Benton and Harry Sullivan. Styggron claimed that the Kraals needed to evacuate their planet due to rising radiation levels, and they wanted to live peaceably with humans on the Earth, so Crayford co-operated fully. He did not know that the Kraals really meant to use the androids to deploy a lethal virus that would wipe out Earth's population within a few weeks.
The Doctor and Sarah met Crayford when the TARDIS materialised outside the fake village. Crayford knew of the Doctor, though they had never met, and took their belief that they were on Earth to prove the replica was a great success. Military chief Chedaki was concerned that the androids could prove dangerous to the Kraals, and so Styggron had Crayford's mind scanned once again - to create a hostile android. It could then be demonstrated that the androids were not immune to Kraal weapons.
Crayford had established contact with the Agency, claiming he had been adrift in space for the last two years, keeping alive by recycling his food and water. The androids would infiltrate the Earth when his ship returned home. The Doctor was able to convince Crayford that the Kraals had been lying to him - his eye was never lost - and that the aliens intended to wipe out the human race. Crayford turned on Styggron, but the Kraal scientist shot him dead.