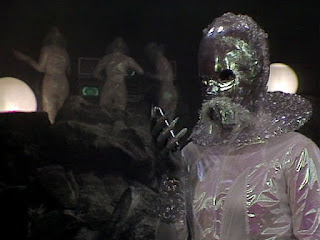 Native inhabitants of the planet Telos, which was invaded and taken over by the Cybermen after the destruction of their homeworld, Mondas. Cryons could only exist at temperatures below freezing. They appeared to be an all-female race. The surface of their planet had become too warm for them, so they were forced to live in cave systems underground. They waged a guerrilla war against the Cybermen, sabotaging their tomb complex. Their leader, Flast was captured and imprisoned in a refrigerated room in Cyber-Control, where she was joined by the Doctor. From her he learned that the Cybermen were going to use a captured time-ship to go back and prevent Mondas' destruction. They would destroy Telos in an experiment using the substance Vastial, a mineral found at the polar regions which became highly volatile when the temperature rose. 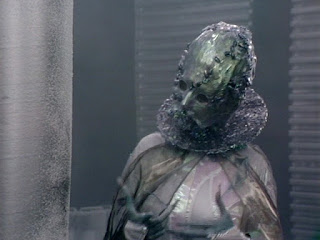 To prevent, this, the Cryons had made contact with the mercenary Lytton, who was stranded on Earth following the defeat of the Dalek mission to rescue Davros from imprisonment in deep space. Lytton was to have helped steal the time-ship. The Doctor escaped, but Flast was unable to follow him. She sacrificed herself to plant his thermal lance in a container of Vastial, although she was killed before the explosion when the Cybermen dragged her into the warmer air of the corridor outside her cell.