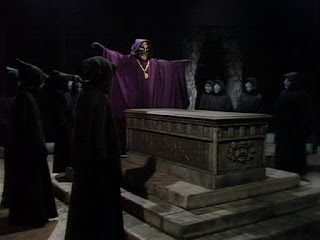 A pagan sect whose origins dated back to Roman times. Demnos was the god of moonlight and solstice. They were active in the dukedom of San Martino up to the end of the 15th Century. Donning black robes and wearing masks, they gathered for their ceremonies in a ruined temple deep in the catacombs beneath the town. They were led by a High Priest, but he was subservient to Hieronymous, who dressed in purple robes and whose mask was made of gold. Hieronymous was the court astrologer, and he had fallen under the influence of an alien intelligence which lay at the heart of the Mandragora Helix. This intelligence planned to use the brethren of Demnos in its scheme to halt human progress - leaving the human race susceptible to pagan superstition. It rebuilt the temple, and imbued Hieronymous with great powers, which he shared out amongst the rest of the Cult. They were instructed to attack the ducal palace during the masque ball to celebrate the accession of Giuliano as the new Duke of San Martino. Present were many great luminaries of the Renaissance, who would be sacrificed to Demnos. 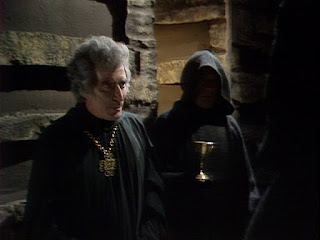 The Cult had earlier abducted Sarah, planning to sacrifice her. She was freed by the Doctor but then recaptured. Rather than face sacrifice a second time, Hieronymous instead hypnotised her so that she would kill the Doctor.
The Cult members infiltrated the masque wearing disguises. They took everyone to the temple, where Hieronymous summoned down the Mandragora Helix energy into the sacrificial altar. Touching it, the brethren were destroyed, as the Doctor had disposed of Hieronymous and taken his place - rigging the altar to drain away their energy.