C is for... Cowell, Emma-Louise 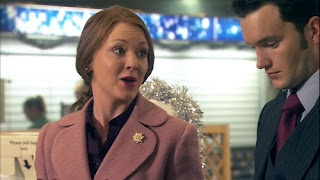 A young woman from the 1950's, who found herself in the Cardiff of 2007. The plane she was travelling on had passed through the Rift in time and space which was centred on the city. Emma had to get used to living in this modern world. She was befriended by Gwen Cooper, who pretended to her boyfriend Rhys that Emma was a cousin. He discovered from her mother that she had no such relative. Emma stayed at a hostel with her fellow time-travellers, and made friends with a couple of girls living there. Some drawings she had made of 1950's fashions chimed with current retro-fashion looks, and she found herself offered a job in London as a designer. Of the three people who had travelled through the Rift, Emma was the only one to embrace the new opportunities which this afforded and make a new life here.