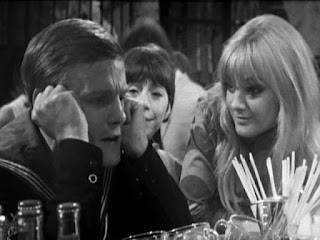 Only the one episode ever to have debuted on this date, but it is a significant one. The War Machines Episode 1 in 1966 saw the TARDIS arrive in contemporary London for the very first time, other than the odd brief stopover, and we have the bizarre image of the Doctor visiting Covent Garden's trendiest night club in his "fab gear". The episode also introduces a pair of contemporary companions - sailor Ben and secretary Polly. There hadn't been a present day companion since Ian and Barbara left, and they were hardly the embodiment of the '60's zeitgeist. 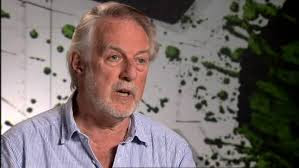 Today we wish designer Roger Murray-Leach a very happy 79th birthday. When we talk about the Hinchcliffe-Holmes era of the programme, we should also include Murray-Leach's design work as part of its success (alongside costumes by James Acheson and direction by David Maloney).
His first work on the programme was the space station setting for The Ark in Space, which would be reused in Revenge of the Cybermen. As well as the curving outer transom, which could be filmed from either end to vary the shots, he had the cryogenic chamber built upwards rather than horizontally, and used mirrors to create a sense of neighbouring chambers.
With little to do on the Dartmoor location for The Sontaran Experiment, it was Murray-Leach who was tasked with taking the injured Tom Baker to hospital.
Murray-Leach devised the figure-8 Prydonian Seal emblem which is still used as a generic Time Lord symbol to this day. It was first used as a Vogan emblem in Revenge of the Cybermen, then reused for The Deadly Assassin. Murray-Leach was responsible for the grand Panopticon set for this story, which was reused for The Invasion of Time. Future Time Lord stories failed to adhere to his designs, and suffered for it accordingly.
The highlight of his Doctor Who career is undoubtedly the jungle setting created at Ealing Studios for Planet of Evil - a set which was later used as a teaching aid for good design.
His contribution ended alongside that of Hinchcliffe and Maloney, going out with a bang on The Talons of Weng-Chiang, in which he designed the realistic sewer sets plus Greel's impressive House of the Dragon lair, with its huge golden dragon statue.
A few examples of his work: 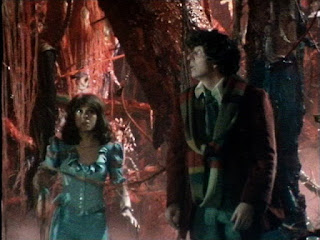 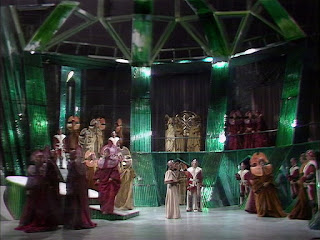 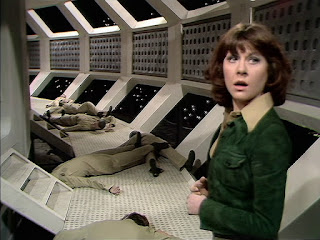 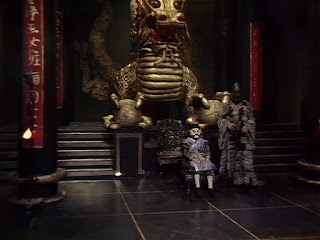 Posted by GerryD at 13:28
Email ThisBlogThis!Share to TwitterShare to FacebookShare to Pinterest