On This Independence Day... 4th July 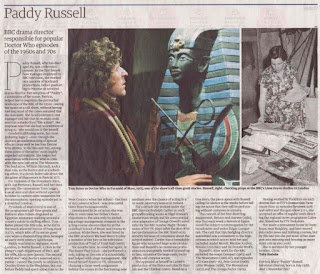 I wonder what Paddy Russell would have thought about the obituaries emphasising her work on Doctor Who, over the work she did with Rudolph Cartier in the 1950's - including influential classics like the Quatermass serials and 1984.
Today would have been her birthday.
She directed four stories, starting with The Massacre in 1966. She never helmed a Troughton story but did direct Invasion of the Dinosaurs with Jon Pertwee. The experience didn't put her off, as she then worked on two Tom Baker stories - Pyramids of Mars and Horror of Fang Rock. She had originally been pencilled in to direct earlier - on Edge of Destruction.
In case you are wondering, no Doctor Who episode, or any spin-off, has ever debuted on today's date. We are now well into the summer and almost all of the seasons have come to a close, so expect more days like this.
Looking for a tie-in with Independence Day in the USA, I have come across the death of actor William Hurndall today in 2019. He played Ike Clanton in The Gunfighters - the only story of the classic era to be wholly set in the US.
Posted by GerryD at 14:26 No comments:
Email ThisBlogThis!Share to TwitterShare to FacebookShare to Pinterest

Episode 26: The Keys of Marinus 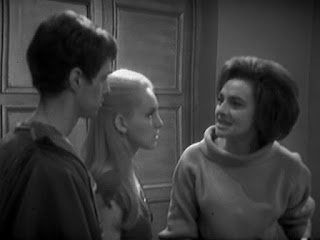 Synopsis:
Barbara receives a call from a terrified Susan, informing her that she will be killed if efforts to free Ian continue...
She notifies Sabetha and Altos but decides not to tell the Doctor, for fear it will distract him from his efforts to defend Ian. As it is now known that Aydan was involved in the crime, they decide to go and see Kala, in the hope that she might have some information about the people with whom he has recently associated.
She tells them that she cannot help, and sympathises with how they must be feeling since they heard from Susan. After they have gone Kala goes into a back room, where Susan is bound and gagged. Kala is going to kill her, as instructed by her mysterious partner in crime. As they walk away Barbara realises that Kala has given herself away - how could she possibly have known that Susan had spoken to her earlier?
They return to the apartment and are just in time to stop Kala from killing Susan.
Later, they hear from Tarron that these events have still not helped Ian as Kala is claiming that he was her accomplice. Tarron no longer believes Ian guilty, but until the stolen key is located and Kala's accomplice revealed, his hands are tied.
With time running out for the school teacher, the Doctor has a sudden brainwave. All of the evidence is locked in a cabinet in the Guardians' office at night, including the murder weapon. The Doctor arranges a trap - waiting in the office in the dark until a masked figure sneaks in and opens the cabinet. This proves to be Prosecutor Eyesen, caught with the weapon in his hands. The Doctor opens a secret compartment in the club to reveal the missing key. He knew it had to be there all the time, but this information was useless until now.
The Doctor sends Sabetha and Altos on ahead to let Arbitan know of their successful mission, whilst he, Susan and Barbara wait for Ian's release. Tarron has ensured that they have been given the key from the museum.
At the island pyramid, the Voord have taken over. Their leader, Yartek, is going to pose as Sabetha's father to trick the TARDIS crew when they arrive with the final key. Hiding his face beneath the hood of his robes, he claims to have been disfigured by a discharge from the Conscience Machine. When he tells Ian that he doesn't know Altos, the teacher suspects a trick, and so gives him the fake key which Darrius had made. They find Sabetha and Altos locked in a cell and free them. When Ian tells them what he has done, they urge everyone to leave immediately as the Machine will overload and explode.
On hearing that they have escaped, Yartek inserts the fake key, intent on using the Machine to subjugate them and bring them back. It explodes, destroying him and the rest of the Voord.
Altos and Sabetha decide to settle in Millennius. Whilst he greatly admired Arbitan, the Doctor tells his daughter that people were never meant to be ruled by machines. She gives him the surviving key as a souvenir.
The TARDIS dematerialises from the island...
Next week: The Temple of Evil 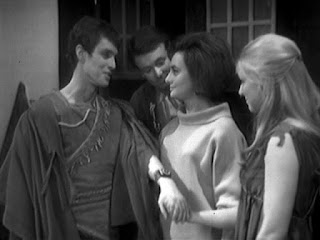 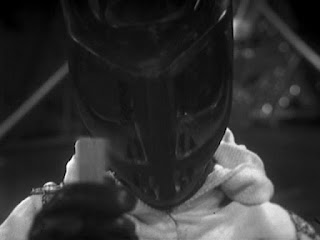 Trivia:
Posted by GerryD at 13:09 No comments:
Email ThisBlogThis!Share to TwitterShare to FacebookShare to Pinterest
Labels: Classic Series, Episodes, Season 1 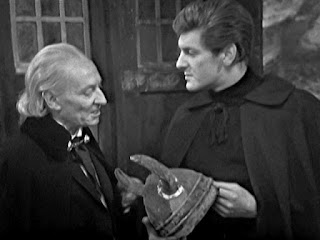 Today in 1965 Steven Taylor became the series' second male companion, following the departure of Ian in the previous story. Peter Purves' character had featured in that previous tale - The Chase - but had last been seen wandering around the jungles of Mechanus. It was only with Part One of The Time Meddler - The Watcher - that we learned that he had found his way aboard the TARDIS. 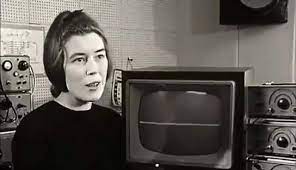 Today we remember one of the key figures in the origins of Doctor Who. Delia Derbyshire never composed the iconic theme music, but she did create it. Ron Grainer did the composing, but it was Derbyshire, assisted by her colleague Dick Mills at the Radiophonic Workshop, who undertook the laborious task of realising it, quite literally putting it together note by note. Her arrangement has never been bettered.
She passed away on this day in 2001, aged 64.
We also remember the actor Earl Cameron who played astronaut Williams in The Tenth Planet. He died in 2020 at the age of 102.
Posted by GerryD at 12:07 No comments:
Email ThisBlogThis!Share to TwitterShare to FacebookShare to Pinterest 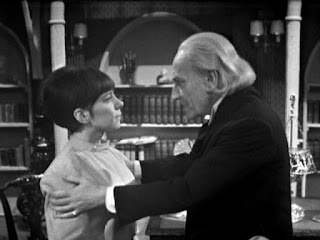 The War Machines Episode 2, shown today in 1966, marked the end of the road for the character of Dodo Chaplet. After being hypnotised by WOTAN in the previous instalment, the Doctor broke the mental conditioning then packed her off to the countryside to recuperate - and that was the last we saw of her. 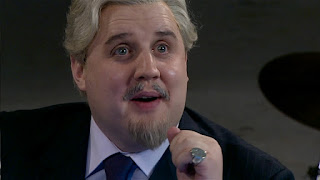 Today we wish Peter Kay a happy 49th birthday. He portrayed Victor Kennedy / the Abzorbaloff in Love & Monsters. After a long period away from the spotlight he has started to make the odd appearance again.
We also remember writer Don Houghton who passed away on this date in 1991, aged 61. He wrote Inferno and The Mind of Evil, the latter of which featured his wife Pik-Sen Lim as Captain Chin Lee. His was a very varied career - from writing latter Hammer Horrors like Dracula AD 1972 and The Satanic Rites of Dracula, to creating the Scottish soap opera Take the High Road. It was his work with Hammer which prevented him from writing any more Doctor Who.
Two actors with links to The Two Doctors also passed away on this date. James Saxon played Oscar in the story. He died in 2003 aged only 48. Elizabeth Spriggs was cast as Chessene, but was sacked when she refused to attend rehearsals for the overseas filming. She was later cast as Tabby in Paradise Towers. She died in 2008, aged 78.
Posted by GerryD at 12:54 No comments:
Email ThisBlogThis!Share to TwitterShare to FacebookShare to Pinterest

What's Wrong With... The Curse of Peladon 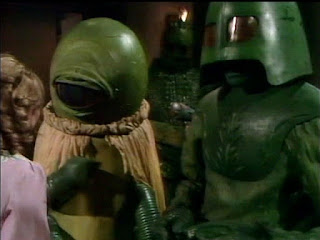 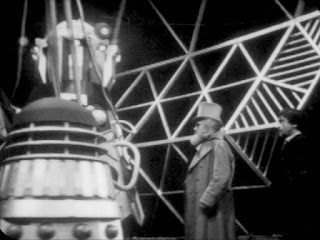 Season Four drew to a close today in 1967 with the final end of the Daleks, in Episode 7 of The Evil of the Daleks. At least that was what we were being lead to believe, as Terry Nation was taking them off to their own series. The BBC turned him down and he was prepared to go to the USA and sell the idea there.
This season had started with William Hartnell, but ended with Patrick Troughton. When they finally get round to releasing it as a Blu-ray Collection box set, it will be presented as a Patrick Troughton season, as he is Doctor for most of it, though it will have two Hartnell stories at the beginning. It will also comprise a heck of a lot of animation. There isn't a single complete story in the archives from this season.
Back in 1968 Nation had forbidden any story in which the Daleks met the Cybermen. This no longer applied in 2006 when Army of Ghosts was produced. It made its debut on this date.
Another season ending was the 10th of the revived series in 2017. Peter Capaldi was all set to regenerate at the conclusion of The Doctor Falls, after first being electrocuted then shot by Cybermen - but he held it off until after Chris Chibnall had got his act together and actually written something.
Fans weren't complaining as it meant we got to see the meeting of the First and Twelfth Doctors that Christmas. 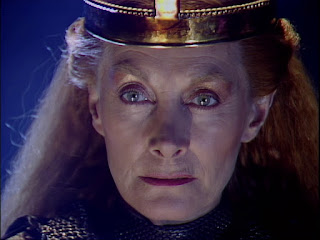 Had Nation been successful with his plans for a Dalek TV series, it may well have included the character of Sara Kingdom, despite the fact that she had been killed off in Doctor Who. Whether Jean Marsh would have agreed to play her again or not, we don't know. Today just happens to be her 88th birthday - so we wish her many happy returns.
Marsh also played Princess Joanna in The Crusade, and Morgaine in Battlefield. She also turned down the role of Chessene in The Two Doctors.
She shares her birthday with Ace Bhatti, who played Rani's dad in The Sarah Jane Adventures Series 2 - 5. He is 52.
Matthew Jacobs, who wrote the 1996 TV Movie, also has a birthday. He turns 66. His dad played Doc Holliday in The Gunfighters.
Posted by GerryD at 13:13 No comments:
Email ThisBlogThis!Share to TwitterShare to FacebookShare to Pinterest 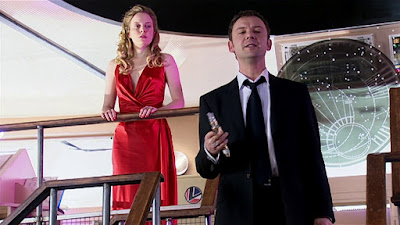 Another season drew to a close today in 2007 - the third of the revived series. The Last of the Time Lords saw the apparent death of the Master, but things were left hanging as someone removed his signet ring from his funeral pyre...
Earlier that morning you could have seen a compilation of the animated adventure The Infinite Quest, which had been a feature of that year's Totally Doctor Who. 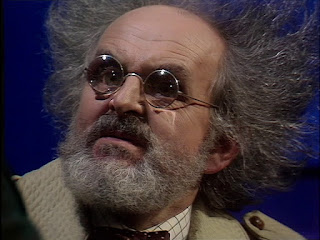 Today we remember actor Edward Burnham, who cornered the market in eccentric scientists for a time. He was Professor Watkins in The Invasion, and Professor Kettlewell in Robot.
He passed away on this date in 2015, aged 98.
We also lost David Ellis - co-writer with Malcolm Hulke of The Faceless Ones - in 1978, aged 60; and actor Glyn Houston, who made two appearances in the series. The first was as Prof. Watson in The Hand of Fear, and the other was as Colonel Ben Wolsey in The Awakening.
He died in 2019, aged 93.
Amongst today's birthdays we have Rupert Graves (Dinosaurs on a Spaceship) who turns 59, and Ashley Walters (Journey to the Centre of the TARDIS) who is 40.
Posted by GerryD at 12:45 No comments:
Email ThisBlogThis!Share to TwitterShare to FacebookShare to Pinterest
Older Posts Home
Subscribe to: Posts (Atom)