Unfortunately I've been rather poorly over the last few days and not feeling up to posting. I think I'm on the mend now, though. Tomorrow I should be receiving the Season 8 box set, so I'm going to concentrate on watching that as I recuperate this week, and I'll be back with a review of the box set next weekend.
See you then.
Posted by GerryD at 14:50 6 comments:
Email ThisBlogThis!Share to TwitterShare to FacebookShare to Pinterest

J is for... Jaeger, Professor 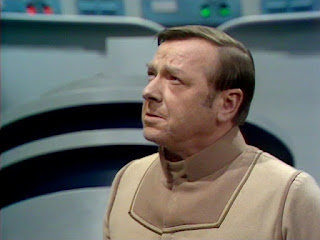 Jaeger was a somewhat inept and amoral scientist who was in the employ of the Marshal of Solos. The Marshal ruled the planet Solos on behalf of the Earth Empire, which was then in decline. The Marshal used Jaeger to conduct experiments to make Solos' atmosphere breathable by humans, so that it could be fully colonised, irrespective of the harm it might do to the native peoples.
When the Doctor arrived on a mission for the Time Lords, he was forced to help the professor, but found that he could easily trick him as he did not know half of what he claimed to know. Occasionally Jaeger would stand up to the Marshal, but would always then follow his orders.
One of the Doctor's ruses was to sabotage the machine which would alter Solos' atmosphere, which the Marshal insisted Jaeger operate, and the professor was killed when it exploded.
Played by: George Pravda. Appearances: The Mutants (1972).
Posted by GerryD at 21:28 No comments:
Email ThisBlogThis!Share to TwitterShare to FacebookShare to Pinterest
Labels: A to Z 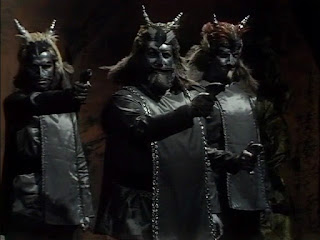 A race of bird-like humanoids from the planet Jaconda. This idyllic world had for many years been ruled by a Time Lord named Azmael, who at one point had been visited by the Fourth Doctor. An ancient legend told of how the planet had once been blighted by giant slug-like creatures called Gastropods, which devoured all the vegetation and left the population starving. This had been caused when the queen of the planet had slighted their sun god. The sun god relented and destroyed the Gastropods. However, the story was more than mere myth. One Gastropod egg had survived and this resulted in Mestor, a Gastropod with great mental powers. He took over the planet and his people once again laid waste to it. Once again the Jacondans starved, and anyone caught stealing food was executed by Mestor, aided and abetted by his unctuous Jacondan Chamberlain. 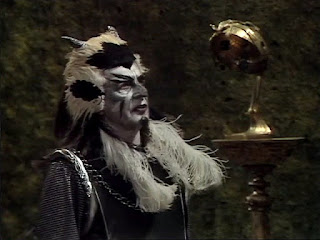 Azmael was forced to work with Mestor on a scheme to use neighbouring planets as food sources for Jaconda - bringing them into closer orbit with their sun. Azmael abducted a pair of mathematically gifted twins - Romulus and Remus Sylvest - from Earth to help achieve this. Azmael was given two Jacondans as helpers in this task, the friendly Noma and the duplicitous Drak. The newly regenerated Sixth Doctor stumbled into this scheme, along with companion Peri and an Earth space security officer named Hugo Lang.
The Doctor realised that Mestor's true scheme was to destroy Jaconda and its neighbouring planets in a cosmic explosion which would send millions of Gastropod eggs across space to colonise other worlds.
Mestor killed Noma after using him to psychically spy on the Doctor and Azmael. Once the Gastropod had been defeated, the treacherous Chamberlain attempted to escape the planet but Lang refused to allow him to take the TARDIS. Azmael had died in defeating Mestor, and Lang decided to stay on as the new ruler.
Played by: Oliver Smith (Drak), Barry Stanton (Noma), Seymour Green (Chamberlain). Appearances: The Twin Dilemma (1984).
Posted by GerryD at 21:28 No comments:
Email ThisBlogThis!Share to TwitterShare to FacebookShare to Pinterest
Labels: A to Z 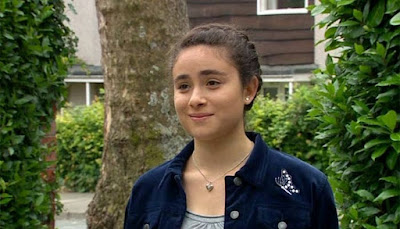 Maria Jackson was a schoolgirl who moved into a house on Bannerman Road, Ealing, with her father after her parents - Alan and Chrissie - had split up. The house was across the road from the home of Sarah Jane Smith. One night Maria saw strange lights coming from Sarah's garden, and witnessed her meeting with an alien being. Sarah had initially been reluctant to engage with the Jacksons, but their paths crossed when Maria and her friend Kelsey visited the new Bubble Shock! soft drinks factory, which Sarah was investigating. The factory was cover for an alien species called the Bane, who were planning to use their drink to take over everyone who drank it. Maria did not like it, so was immune to its effects. To refine the drink's effects, the leader of the Bane - Miss Wormwood - had created a human boy. Sarah and Maria rescued him, and he would become Sarah's adopted son Luke. After the Bane attacked Sarah's home, Sarah had no choice but to include Maria in her work. After the factory had been blown up, Maria and Luke started their new school - Park Vale. Here they met and befriended fellow pupil Clyde Langer. They discovered that the Headmaster and some of the teachers were disguised Slitheen, out for revenge after the destruction of their kin in the Downing Street explosion. The Slitheen planned to shut down the sun. Maria helped Sarah defeat them, along with Clyde and Luke.
Some time later Maria befriended an old lady named Bea at the Lavender Lawns retirement home, and learned that she had encountered aliens in her youth. She possessed an amulet which the alien Gorgons were seeking, in order to invade the Earth. At one point Maria's father was turned to stone by the Gorgon, but the amulet cured him.
Maria then helped Sarah defeat General Kudlak's plan to abduct children from gaming arcades to fight an interplanetary war - an adventure which allowed her to visit outer space and see the Earth from above.
Sarah gifted Maria an alien box, which - during the night - protected her from the Trickster removing Sarah from time and replacing her with an old school friend, Andrea Yates. As schoolchildren, Andrea had died in an accident, and the Trickster allowed her to swap with Sarah. Only Maria could remember Sarah, and know that time had been changed. Later the Trickster had Maria removed from time, but this time her father had been protected by the alien box. He forced the Trickster's Graske servant to return Maria, and later Sarah was able to convince Andrea to swap back before the Earth was destroyed by a meteorite. It was during this adventure that Alan found out about his daughter's dealings with aliens, and he threatened to move them away from the area.
However, Alan was on hand to help his daughter when they had another encounter with the Slitheen - this time attempting to crash the Moon into the Earth.
Maria and Alan were on holiday in Cornwall when the Daleks and Davros moved the Earth out of its orbit to the Medusa Cascade.
Alan then announced that he had been offered a new job in the United States, and Maria had to inform Sarah she would be leaving. Unhappy at her departure, Sarah at first shunned Maria when they were called upon to investigate strange happenings at the Goblins Copse space research station. This proved to be the work of a lone Sontaran survivor of their recent failed attempt to turn Earth into a clone breeding planet. Sarah later apologised for her attitude towards her, as she had come to admire her and did not want to lose her.
Maria continued to stay in contact with Luke, Sarah and Clyde, and their new friend Rani, who had moved into her old home - including assisting with tracing Clyde when his father was taken over by a Berserker artefact. They were unable to attend Sarah's wedding, but Maria remained in touch with Luke for years afterwards.
Played by: Yasmin Paige. Appearances: SJA Pilot - Invasion of the Bane (2007), SJA Series 1 (2007), SJA 2.1 The Last Sontaran (2008), SJA 2.4 The Mark of the Berserker (2008).
Posted by GerryD at 21:28 No comments:
Email ThisBlogThis!Share to TwitterShare to FacebookShare to Pinterest
Labels: A to Z
Newer Posts Older Posts Home
Subscribe to: Posts (Atom)