Episode 24: The Snows of Terror 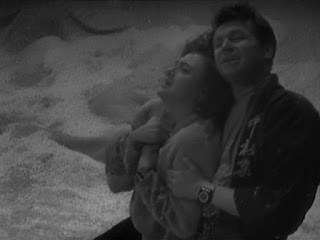 Synopsis:
The travel dials take Ian and Barbara to a snowy wasteland, where they are overcome by the freezing temperatures...
They are found by a fur trapper named Vasor, who takes them to his remote cabin. When they awake he informs them that he had help in bringing them here - Altos. He has left to go up the mountain to look for Susan and Sabetha. Once Ian has recovered, he sets off to find them all. In return for furs, he is forced to hand over his travel dial. Once he has gone, Barbara finds that Vasor has all the travel dials hidden in a drawer.
Ian finds Altos tied up in the snow. He was attacked by Vasor and left for dead. When they discover that wolves are on their trail they find that the trapper had filled Ian's bag with raw meat to deliberately attract the beasts.
Both head back to the cabin and arrive back just in time to stop the trapper from forcing himself on Barbara. Vasor claims that he left the girls some furs and materials to build a fire when he showed them how to reach a cave on the mountain. Ian forces him to lead them all to it. The trapper is afraid, claiming there are evil spirits on the mountain.
With their fire dying, Susan and Sabetha have decided to leave their cave, but find they cannot recall the way out. They actually go deeper into the mountain and find a cavern in which the key is located - frozen in a huge block of ice. Surrounding this are four armoured figures, armed with a variety of weapons. To reach this cavern they had to cross a flimsy rope bridge.
The others arrive and are so pleased to be reunited with the girls that they fail to see Vasor slip back and unhook the bridge, leaving them stranded.
They decide to make a temporary bridge using some large icicles which should freeze solid. In the cavern a pipe system holds hot water, which Barbara assumes comes from some volcanic vent deep within the mountain. These pipes surround the block of ice, and once turned on it begins to rapidly melt.
As soon as the key is freed, however, the four soldiers stir to life. They give chase, determined to retrieve the key. Susan risks going across the icicle bridge and succeeds in hooking the rope bridge back up. Once everyone has crossed it, Ian unhooks it again to leave the soldiers trapped, though one of them plunges into a ravine.
Vasor is shocked to see the travellers return to his cabin. He is horrified to see that the remaining soldiers are fast approaching. Ian distributes the travel dials to his friends and they leave seconds after the trapper is killed by one of the soldiers thrusting his sword through the wooden door.
Ian finds himself alone in a vault in which there is a glass display case. Within is the next key. A uniformed man lies dead on the floor.
As he tries to open the case someone strikes Ian down from behind, and places a club-like weapon in his hand...
Next episode: Sentence of Death 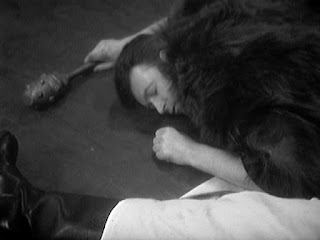 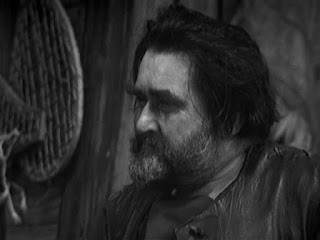 Critique:
After the hot, jungle backdrop to last week's instalment, Terry Nation wanted the contrast of a cold, snowy environment for this one.
The only new character is Vasor. He lusts after Barbara in explicit fashion, seemingly intent on raping her. Despite this, the story was granted a "U" rating when it came out on VHS in 1999.
He claims to be able to kill wolves single-handedly, yet Barbara gets the better of him, and he seems afraid of what Ian might do to him. Why does he not simply kill Altos instead of leaving him tied up in the snow, and why does he likewise not simply kill the girls? Why he thinks that the travel dials are of worth to him we also don't know.
Each of the Ice Soldiers is given a different weapon. One has a sword, another a battle axe, the third a lance and the fourth a mace. This was used in the scripts to indicate which soldier was doing what - e.g. "'Sword' raises his weapon".
The actual nature of the soldiers is never made clear. We see a close up of the helmet of one of them and it can be seen that there is a human face beneath. (One of them is actually blinking as the travellers first enter the cavern). Later, one of the soldiers plunges into a ravine and he screams as he falls.
Everything points to them being humanoids, and yet they survive being frozen into immobility in the cavern for an unknown period of time - probably years at the very least.
In the draft scripts for this episode, the soldiers were themselves going to encased in pillars of ice.
When it came to his factual Target book The Adventures of K9 and other Mechanical Creatures (1979), Terrance Dicks actually listed the Ice Soldiers as robots.
Arbitan's actions with the keys are rather difficult to fathom. The keys operate the Conscience Machine, so have been scattered across Marinus to prevent them falling into the wrong hands. And yet one of them is kept with the machine. Why not hide that one as well? The key that went to Morphoton is simply given to Sabetha when she asks for it - suggesting that the Morpho arrived later and did not know its true value. Darrius has traps set which could easily kill genuine agents of Arbitan, who have come legitimately to retrieve his key. The key in The Snows of Terror is encased in a block of ice, guarded by strange living dead soldiers. Who put it there, and how was a genuine agent of Arbitan supposed to retrieve it without the Ice Soldiers killing them?
In the City of Millennius, the key is actually left on public display in a museum, as though the citizens know what it is. However, the people who set out to steal it in the latter two episodes of the story believe it has great monetary value, yet don't seem to know what it does.
It is odd that some people on Marinus seem to know all about Arbitan and the Conscience Machine, whilst others haven't got a clue.
For the second time this story, the travel dials seem to separate the travellers in both space and time. Barbara had time to do lots of things in Morphoton before Ian, Susan and the Doctor caught up with her, and here Ian finds himself alone in the museum vault, with no sign of the companions who left at the same time as him, and who were standing right next to him. He's there for a good couple of minutes without them appearing. Where are they? They can't be just the other side of the door in the corridor, otherwise they would know who attacked Ian and killed the guard.
Ray Cusick was generally dismissive about the sets for this story, but he singled this episode out for special condemnation. He particularly hated the ravine / bridge set. Producer Verity Lambert had seen this and expressed her dissatisfaction, asking him what he was going to do about it. Unfortunately, he had no money to do anything to improve the set. The ravine area was supposed to look like it was carved out of ice, but he had to make do with sets from stock which looked like stone walls, rather than natural rock. To disguise this he covered them with cling-film to make them look like they were coated in ice, and asked for the lighting to be kept as low as possible, plus tighter shots omitting the background as much as possible.
The tunnels and the key cavern used paper over chicken wire covered in cling-film to better effect. Other rocks, such as the one which blocks the tunnel, were made from jablite, which is expanded polystyrene.
The rope bridge actually collapsed during rehearsals whilst Carole Ann Ford was crossing it. She was shaken but otherwise unhurt.
Model shots of the ravine had been filmed, but these went unused in the end. 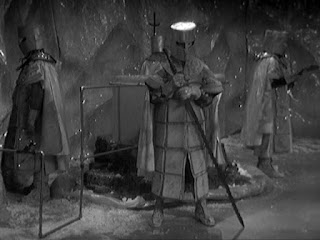