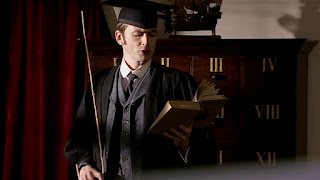 In which a history master at Farringham School for Boys dreams that he travels through time and fights aliens. The maid who cleans his rooms - Martha Jones - assures John Smith that this is just his imagination. The year is 1913, and Smith and Martha have been at the school for around a month. The socially awkward teacher has taken a liking for the school matron, Joan Redfern, and decides to pluck up the courage to ask her to a ball that is going to be held in the village hall. He tells Joan of his dreams, and shows her a journal he has made of them - his Journal of Impossible Things. Martha tries to convince the matron not to heed Smith. Joan becomes indignant that a maid should interfere in what Smith does. That night, Martha goes to the TARDIS, hidden in a barn some miles away, and activates a recording which the Doctor had made.
Some weeks ago, the Doctor and Martha had encountered a hostile alien force called the Family of Blood. They exist in a gaseous form, and have a very short life-span. They want to take the Doctor's body so that one of their number - Son of Mine - can have a prolonged existence as a Time Lord. They have a stolen spacecraft that can travel in time, and the Doctor knows that they will hunt them down. To avoid detection, he decides to use a Chameleon Arch to rewrite his biology. He will become a human being, with a set of new memories grafted on. His Time Lord essence will be stored in a fob watch. They only need to hide for a month or so, then the threat will be gone as the Family will have died out by then. The Doctor has made a recording to help Martha cope whilst he is John Smith, but he had not reckoned on falling in love with someone. 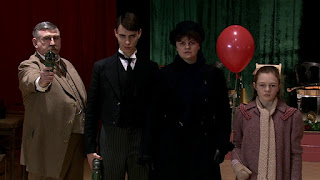 That same night, the Family's spaceship arrives nearby. A pupil named Jeremy Baines comes across it whilst out hunting for alcohol, and he is taken over by Son of Mine. He returns to the school to seek out the Time Lord. A fellow pupil named Tim Latimer has mild telepathic gifts, and recognises the change in Baines. On a visit to Smith's rooms, he spots the fob watch and is drawn to it, slipping it into his pocket. The Family take on more bodies for themselves. Farmer Clark sees one of his scarecrows move. Thinking it is one of the pupils playing a prank, he investigates, only to find that it is just straw. He is taken over by Father of Mine. The Family can animate scarecrows to use as an army. They attack a girl named Lucy Cartwright, who becomes the host for Daughter of Mine. Jenny, a friend of Martha's who is also a maid at the school, is taken over by Mother of Mine. Tim is compelled to open the fob watch, and the Family sense the Time Lord's presence at the school. John Smith is walking with Joan when a little of the Doctor's character slips out, as he uses a cricket ball to prevent an accident. Martha discovers that Jenny has been taken over and runs off to the dance to warn the Doctor. Tim sneaks into the dance and sees the Family arrive. They now know that Smith is the Doctor, but he has no idea of his real self. Martha helps everyone flee the hall. Smith and Joan head back to the school to warn the staff and pupils. 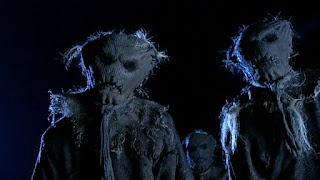 The Family lay siege to the school with their scarecrow army and launch an attack. The pupils are forced to fight them. Martha attempts to convince Smith that he really is the Doctor, and finds an ally in Joan. She suspects that the Doctor's dreams may be true, and had noticed that his life seemed to be merely a list of facts. Smith is horrified that he will have to cease to exist for the Doctor to return. The Family seize the TARDIS, and then start to bombard the village. Hiding out at the Cartwright's home, Joan and Martha attempt to get Smith to accept who he really is. For a moment he gets to see what his life would have been like if he had remained as the teacher, marrying Joan and having children before growing old and dying in bed. Tim arrives with the fob watch, and tells them of the heroic Time Lord he has seen in it. Smith goes to the Family's spaceship to give himself up. He hands over the fob watch. However, it proves to be empty. The Doctor has returned. He has stumbled around the ship in his guise as Smith, pretending to be clumsy when he has in fact been sabotaging it. The Family flee before the vessel explodes. The Doctor then takes his revenge on each of them. Father of Mine is imprisoned in dwarf star alloy chains at the heart of the TARDIS, whilst Mother of Mine is left suspended on the edge of a Black Hole. Daughter of Mine is trapped in a mirror - every mirror. Son of Mine is left frozen in time and set up as a scarecrow, to guard over the fields of England for all time.
The Doctor asks Joan to join him in his travels, but she rejects him. She loved Smith, but the Doctor scares her. Would anyone have died in the village had he not come here, she asks him. The Doctor gives Tim the fob watch before he and Martha depart. Tim had frequently had a vision of a battlefield, and the watch had saved his life as he knew when to leap to safety from a falling bomb.
In 1914, Europe went to war. Tim one night found that his vision had come to pass, and the watch saved him. Many decades later, now an old man, he attends a Remembrance Day service, and sees the Doctor and Martha watching from a distance, wearing red poppies... 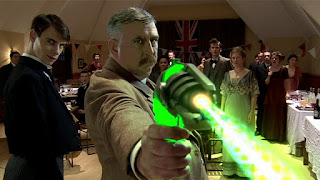 Human Nature / The Family of Blood was written by Paul Cornell, and was first broadcast on 26th May and 2nd June, 2007. It was adapted from Cornell's 1995 Virgin New Adventures novel Human Nature, which featured the Seventh Doctor and companion Bernice Summerfield. A poll to mark the programme's 35th anniversary had voted this book the fans' favourite. Cornell had developed the plot with fellow NA writer Kate Orman.
Cornell had previously written the Series 1 story Father's Day. To date, he has not written any further episodes for the series.
Russell T Davies loved the novel, and so approached Cornell about adapting it for Series 3. A well as the change of Doctor / companion, there are a number of significant differences between the book and the screenplay. In the book, the Doctor decides to become human in order to understand grief, as Bernice is mourning a character who was killed in the previous novel. He purchases the means to do it - rather than using a piece of TARDIS technology. His Time Lord essence is stored in a cricket ball rather than a fob watch. Joan is a fellow teacher. The enemy are called the Aubertides, and they are shapeshifters, rather than a species who possess people's bodies. It is slightly later in the novel as well - already into 1914. The scarecrow army are Davies' idea, as the series since 2005 had to include a monster each week. Cornell was not convinced, but the scene where the pupils gun down the scarecrows as the hymn To Be A Pilgrim plays is one of the strongest of the two episodes.
In the book, the Doctor rejects Joan at the end, rather than the other way round, as he cannot love her in the same way now that he is no longer human. A big change is the character of Tim. In the book he becomes a conscientious objector, and saves the man's life as a Red Cross orderly. He later wears a white poppy when revisited in the epilogue. 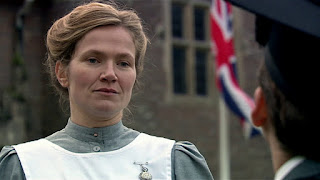 The main guest cast is headed by Jessica Hynes (known as Jessica Stevenson until 2007) as Joan. She was best known for starring in, and co-writing, Spaced, with Simon Pegg. She'll be back at the end of David Tennant's tenure as the Doctor, playing Joan's granddaughter Verity Newman.
Playing the Family we have: Gerard Horan (Father / Mr Clark), Rebekah Staton (Mother / Jenny), Harry Lloyd (Son / Baines) and Lauren Wilson (Daughter / Lucy). Lloyd was a regular in the first two seasons of Robin Hood (as Will Scarlett), and featured in the first series of Game of Thrones as Daenerys' brother.
Also from Game of Thrones we have Thomas Sangster playing Tim. He goes by the name Brodie-Sangster these days. He first came to prominence in the movie Love Actually, and is now a regular in the Maze Runner franchise.
One other guest of note is Pip Torrens as the headmaster, Mr Rocastle. He can be seen in the TV series Versailles these days. 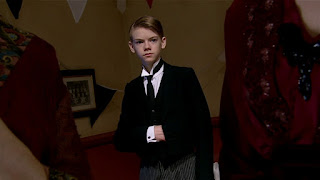 The cliffhanger: The Family have arrived at the village dance and they take Martha hostage. Father of Mine aims his gun at Joan and Smith is offered a choice - the life of his friend or that of the woman he loves...
Story Arc: As the story is set in 1913, we don't have any Saxon references over these two episodes, but the Chameleon Arch is introduced, and the fob watch, and these will play a significant role in a few week's time. 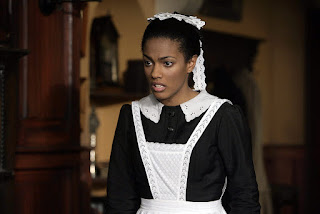 Overall, a fantastic two parter which is deeply moving at times. David Tennant is wonderful as Smith (he won an award for his role in this story). Great performances all round really. Various polls have put it in the top 10 best Doctor Who stories ever. The DWM Mighty 200 had it in 6th place, whilst the 50th Anniversary poll placed it at 9th.
Things you might like to know:

Email ThisBlogThis!Share to TwitterShare to FacebookShare to Pinterest
Labels: Series 3