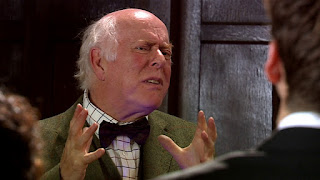 The resident historian on the SS Titanic spaceship which operated out of the planet Sto. He claimed to have a degree in Earthonomics, but the Doctor was bemused by his description of Christmas when he joined Copper and others on a trip down to the planet. For instance, Santa had fearsome claws, and the people of UK went to war with the Turkey people at Christmas, not long before boxing started.
Copper survived the impact of a trio of meteoroids which crippled the ship. He revealed to the Doctor that he was here under false pretences, as his degree had actually come from Mrs Golightly's travelling university and laundry service. He had been an itinerant salesman for a time, when he used to take shelter with cyborgs who were discriminated against on Sto. Passenger Bannakaffalatta revealed that he was a cyborg, whose electro-magnetic pulse emitter could disable the lethal Heavenly Host robots. Mr Copper took the pulse generator after Bannakaffalatta died and used it as a weapon against further attacks. Once Max Capricorn had been defeated Mr Copper attempted to help the Doctor save Astrid Peth, as she had been wearing a teleport bracelet when she was killed. This failed, and he convinced the Doctor to let her go.
A rescue mission was on its way from Sto, but Copper told the Doctor that he would end up in jail for his deception. The Doctor took him to Earth, where it was found that he had a credit card which would make him rich. He was advised to keep his head down and live a quiet life.
It later transpired that he had invested the money in setting up the Mr Copper Foundation. Its research led to the development of the Sub-Wave Network. Ex Prime Minister Harriet Jones used this to contact the Doctor and his associates when the Earth was moved across space to the Medusa cascade by the Daleks.

Played by: Clive Swift. Appearances: Voyage of the Damned (2007).