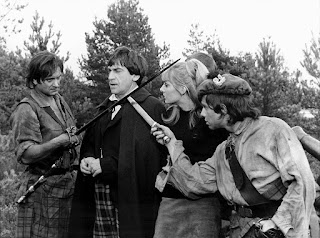 The final historical story of the 1960's, the last of a regular run that began with the fourth story back in 1964. Some would argue that it's the final historical story of them all, as Black Orchid could have been set in any time period, and makes use of George Cranleigh as the monster-of-the-week.
Not only has the TARDIS travelled back into Earth's past, but it has arrived at a significant historical event - or at least the immediate aftermath of one. No real people are seen, but Bonnie Prince Charlie is mentioned several times and the Doctor pretends that Jamie is the Prince in disguise to fool Solicitor Grey and the Redcoats.
The year is 1746, and the Doctor, Ben and Polly have arrived at the site of the Battle of Culloden, in the Scottish Highlands. The battle has ended, with the Jacobite forces who have survived fleeing in disarray.
Story Editor Gerry Davis had approached veteran writer Elwyn Jones for a script. Jones had created the police series Softly, Softly, and had been the BBC's first Head of Drama (Series) after Sydney Newman had reorganised the drama group. As things turned out, Jones was busy on other things - mainly his own creation - and so Davis wrote much of this story on his own. As with The Smugglers, this is more a story from the literary history genre. An obvious antecedent is Kidnapped, by Robert Louis Stevenson. This is also set just after the Jacobite rebellion, and features a young man who is going to be sold into slavery, as Jamie is here. Highlanders are hunted by a villainous agent of the King, and the young hero poses as someone more important at one point. 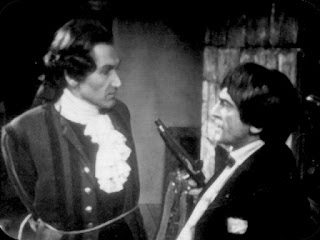 The other big inspiration is the 1964 BBC docudrama Culloden. This was directed by Peter Watkins, and was based on the book by Scots historian John Prebble. It was innovative for being made in the style of contemporary war reporting, and utilised an amateur cast. Much of the camerawork was done with a hand-held camera, to provide a cinema verite look. The action was co-ordinated by Derek Ware -  a name very familiar to Doctor Who fans.
As far as the historical background is concerned, we have to start with the death of Charles II. Despite fathering numerous children, none were legitimate. On his death, therefore, the throne went to his brother James. This wasn't popular with Parliament, as James was openly Catholic and pro-French. It was also feared that he wanted to become an absolute monarch. When he had a son and heir, Parliament approached his daughter Mary to come over and take the throne. She was married to the Dutch Protestant King William III of Orange. In 1688 James was forced to flee, with one attempt to reclaim his throne thwarted after the Battle of the Boyne in 1690. After Mary's death in 1702, her younger sister Anne became Queen. On her death, in 1714, James' son - James Francis Edward - claimed the throne, and this led to the first Jacobite rebellion of 1715. It should be noted that 'Jacobite' derives from Jacob, another version of James. Then, in 1745, James' grandson - Charles Edward Stuart - launched his bid to reclaim the British throne. Initially successful, Bonnie Prince Charlie got all the way to Derby, before being forced back up into the Highlands. He was known as the Young Pretender, whilst his father was known as the Old Pretender. The Jacobite forces were finally routed on 16th April 1746 at Culloden, not far from Inverness. Charles had failed to take military advice, and fled the battle early when he suspected that he had been betrayed. In command of the Hanoverian forces was the King's son - the Duke of Cumberland - who earned himself the nickname "Butcher" Cumberland due to the bloody reprisals he ordered against the defeated Jacobites. So, The Highlanders begins with the aftermath of the battle. The Doctor and his companions find themselves captured by a pair of Highlanders. One of these is James Robert McCrimmon - who will be better known simply as Jamie. Jamie is piper to one of the Jacobite clan chiefs - Colin McLaren. With them are the laird's son Alexander and daughter Kirsty. Alexander is soon killed by Redcoats, who capture the Doctor, Ben, Jamie and Colin. Kirsty and Polly manage to remain at large, and set about rescuing the menfolk. They succeed in blackmailing a young English Lieutenant - Algernon ffinch.
Historically, the McCrimmons were a famous piping family, but they were loyal to the MacLeod clan of Skye rather than to any McLarens. One fanciful theory is that the name is a corruption of the Italian town of Cremona, as the family were founded by a Cremonese who migrated to Ireland. It's more likely to come from Mac (son of) Ruimein - an old Norse name. It needs to be noted that the MacLeods and their McCrimmon pipers were opposed to the Jacobites and fought on the side of the Hanoverian forces in 1745.
Jamie's battle cry of "Creag an Tuirc!" does belong to the McLaren clan. It means 'hill of the boar' and refers to a rocky outcrop outside Balqhidder where the clan would rally before going into battle. 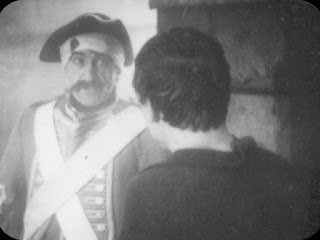 This being a Gerry Davis script, he thinks that the Doctor's name really is "Who". It was under his watch that WOTAN demanded that "Doctor Who is required", and here the Doctor adopts the name Von Wer when posing as a German physician - 'wer' being German for 'who'. Steven Moffat seems to have recently come round to this way of thinking as well.
This story sees the Doctor assume a number of disguises - something that it was hoped would become a regular thing for the Second Doctor. He plays an old washerwoman in Inverness, then dresses as a wounded Redcoat. Apart from a bit of a hat fetish, this disguising act doesn't last beyond this one story.
Captain Trask is even more of a fictional pirate than the ones we saw in The Smugglers - the story that really should have been called "The Pirates". As played by Dallas Cavell, he is pure Long John Silver.
Many Jacobite prisoners were sold into slavery in the West Indies and the Carolinas. Being white men, however, they would more likely have gained positions as overseers on the plantations. As slavery was legal in 1746, and Scots prisoners were being officially shipped out to the colonies, it is unlikely that any serious action would have been taken against the crooked solicitor Grey. 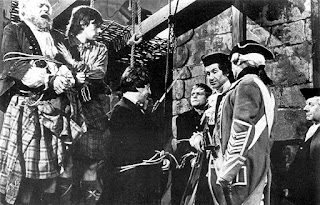 Frazer Hines had acted alongside Patrick Troughton before, and was a friend of producer Innes Lloyd. It was whilst filming that the decision was made to keep him on as a regular companion, with an initial contract of a further three stories. Hines has claimed that public reaction to Jamie led to him getting the companion role, but he is mis-remembering, as his departure in the TARDIS had been filmed before the first episode aired. It was still a last minute decision, as they had already filmed the scene once with him staying behind.
A couple of things you might like to know before we finish. Director Hugh David had been first choice by Rex Tucker to play the First Doctor, but when he was replaced by Verity Lambert she thought David too young, and he didn't want to commit to a long series, having recently come off Knight Errant.
The Highlanders was the first Doctor Who story to be deleted from the archives - the tapes being wiped only a couple of months after broadcast. It was clear that Innes Lloyd believed the historical stories had no future. It was claimed that the poor ratings for The Gunfighters were one of the reasons to ditch the historicals, but this isn't the case. It fared better than The Tenth Planet - the model which Lloyd was to use for his vision for the programme. What The Gunfighters did get was the lowest Audience Appreciation figures.
Next time: there's a mad scientist at work in Atlantis, and nothing in the world is going to stop him...
Posted by GerryD at 22:50