C is for... Connolly, Tommy 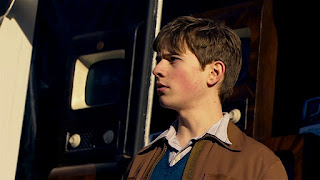 Teenage son of Eddie and Rita Connolly, who lived on Florizel Street in North London. He talked his father into getting a TV set, as the Coronation of Queen Elizabeth II was due. He was horrified when his grandmother was struck down by a mysterious condition - her face rendered smooth and featureless. Many neighbours were also afflicted. Tommy worked out that his father was reporting these victims to the police, who would turn up in the middle of the night and take them away. Tommy warned the Doctor and Rose about what was happening. Later, he rebelled against his father and joined the Doctor in his investigations, accompanying him and Inspector Bishop to the electrical store belonging to Mr Magpie, from where Eddie had bought their TV. He witnessed the Wire removing Bishop's features, and saw the creature's victims trapped in TV screens. He then accompanied the Doctor to the BBC transmitter at Alexandra Palace, and helped him trap the Wire onto a video tape.
The Doctor gifted him his scooter, and also advised him not to judge his father too harshly. Tommy helped his father move out of the family home.