C is for... Colasanto, Angelo 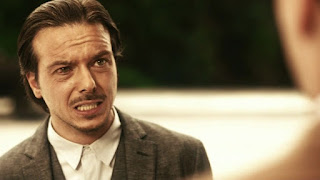 A young Italian man who emigrated to the US in 1927. He had a distinctive bloodshot right eye, which he had had since he was a child. Arriving at Ellis Island, he attempted to steal Captain Jack Harkness' papers and was arrested. Jack decided to help him and arranged for his freedom. They set up home together in New York and became lovers. Jack adopted Angelo as his companion, in the same way that the Doctor had companions, and divulged many secrets about his life to him. The pair got some work transporting bootleg alcohol, but Jack revealed that this was a front and they were actually on a Torchwood mission. They were really carrying an alien mind parasite that was going to be used by agents of the Trickster on future president FD Roosevelt, in order to ensure that the Nazis won the forthcoming war. Jack destroyed the parasite but was killed, and Angelo was sent to prison.
He was shocked to see Jack waiting for him when he came out of jail. Fearing he was some kind of demon, he attacked Jack and stabbed him to death. He witnessed him coming back to life, and showed some friends. These witnesses were the founders of the Three Families, who would many years later use the Blessing to stop people from dying.
Angelo recalled some of the things that Jack had told him about the future, and he became wealthy. He was not invited to join the Three Families due to his sexuality. He monitored Jack's activities over the years, and even bought some of the salvaged alien equipment after the Hub had been destroyed. This included a null field generator, which he set up under the floor of his bedroom. Contacted by Angelo's grand-daughter, Jack met him one last time as a bed-ridden old man. Jack was shocked when Angelo died in front of him. It was discovered that this was due to the generator under the floor, which negated the effects of the Blessing.