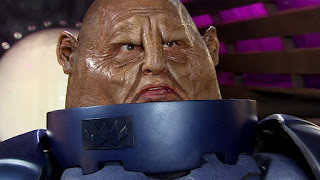 In which the Doctor is giving Donna some lessons in piloting the TARDIS when he receives a phone call. It is from Martha Jones, and she is summoning him back to Earth. The TARDIS materialises in the grounds of the ATMOS factory near London. The Doctor introduces Donna to her predecessor. Martha then calls in UNIT to raid the factory. She now works for them as a medical officer, thanks to the Doctor's influence. Martha introduces the Doctor and Donna to Colonel Mace, who is in charge of the operation. They explain that ATMOS is a device which is used in most vehicles these days. It reduces pollution, as well as providing a Sat-Nav function. A journalist who had been investigating the device and its creator, Luke Rattigan, died recently when her car drove into a river. Now, a number of people across the world are reported to have died in their cars at exactly the same moment. All the vehicles had ATMOS. Rattigan is described as a "boy-genius", who made his fortune inventing an internet search engine whilst still a teenager. UNIT shuts down the factory, but they can find little suspicious evidence. Donna then points out the employee files. No-one in the company has taken a single sick day. Examining one of the workers, Martha finds he seems to be in some kind of hypnotic state. The Doctor decides to go and visit Rattigan, and is driven to his mansion by a UNIT Private named Ross Jenkins. Jenkins explains that Rattigan runs his home as an academy for young people whom he regards as almost as gifted as himself. The Doctor is surprised to see an alien transmat booth in the house. He uses it to transport himself to a spaceship which is in hidden orbit above the Earth. It is crewed by Sontarans. 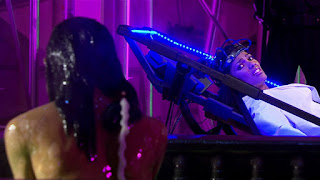 A couple of UNIT soldiers have found a basement laboratory containing a vat of liquid, in which a half-formed humanoid figure reclines. They are captured by a Sontaran - General Staal. They are placed under his mental control and are sent to lure Martha to the lab. She is captured and strapped to a framework, her memories downloaded into the thing in the vat. The creature - a clone - takes on her appearance. It will be used to infiltrate UNIT and aid the Sontaran stratagem. Staal transports himself to Rattigan's home and confronts the Doctor and Jenkins. A well-aimed tennis ball dazes the Sontaran as it strikes his probic vent, allowing the Doctor and Jenkins to flee. Their vehicle has ATMOS, however, and Staal uses this to try to kill them - driving the vehicle towards a river. The Doctor fools the device into stopping short. They head for Donna's house, where she has been reunited with her grandfather, Wilf, and her mother, Sylvia. Realising that the Doctor could thwart their plans, Staal informs Rattigan that they are advancing their plans. A squad of Sontarans led by Commander Skorr are sent to seize the factory and protect the Martha clone. Millions of vehicles already have ATMOS across the globe. The devices are activated, emitting toxic fumes. It is impossible to turn them off. 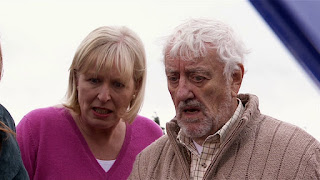 The Doctor and Donna return to the factory as people try to seal themselves in their homes. Colonel Mace ignores the Doctor's advice and plans a nuclear strike on the spaceship. The Martha clone diverts the command signal to her phone so that she can over-ride it. UNIT troops are powerless against Skorr's squad as the Sontarans are using a signal wave which jams the bullets in their guns. Jenkins is amongst those killed.  Donna is sent to the TARDIS for safety but Staal has it transported up to his spaceship. The Doctor is able to communicate with her by phone, and instructs her in unlocking the transmat devices. The Martha clone continues to stop the missile strike from launching. Mace then calls in the UNIT vessel Valiant - the flying aircraft carrier previously designed and used by the Master. It uses its powerful engines to clear the air around the factory. UNIT then deploys weaponry which is unaffected by the bullet-jamming signal. They soon retake the factory, killing Skorr and his men. Donna succeeds in reopening the transmat terminals and the Doctor has the TARDIS returned to Earth. He has guessed that Martha is not who she claims to be, and goes with the clone to the basement lab. Here he breaks the link, killing the clone and freeing the real Martha. 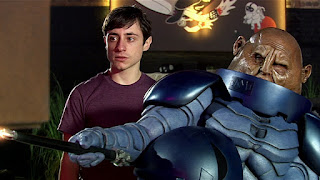 Rattigan informs his students that he has been working on a plan for them to travel to a new planet, to begin their own perfect society under his supervision. He discovers that they do not share his vision, worrying more about their families as the planet is choked by the toxic gases. He travels to the Sontaran spaceship to inform Staal, only to learn that the aliens were never going to take him to his new world. They only needed him for ATMOS, and now his usefulness is ended. The gases which are being produced will change the atmosphere of Earth to make it suitable for mass cloning. The Doctor, Martha and Donna arrive at the mansion, where the Doctor had earlier seen a device for terraforming a planet's atmosphere. He adjust the settings then uses it to burn off the toxic gases, igniting the upper atmosphere. The stratagem thwarted, Staal decides to attack the planet with missiles. The Doctor elects to take the terraforming device to the spaceship - offering the Sontarans a chance to surrender, otherwise he will use it to destroy the ship. He will die in the process, however. The Doctor had managed to get through to Rattigan to do the right thing for once, and so he uses the transmat to swap places with the Doctor at the last moment. The Sontarans and their vessel are destroyed. Later, Wilf encourages Donna to continue her travels with the Doctor, no matter the risk. Martha enters the TARDIS to say her goodbyes. Suddenly, the doors lock shut and the ship dematerialises - hurtling out of control... 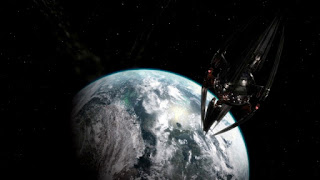 The Sontaran Stratagem / The Poison Sky was written by Helen Raynor, and was first broadcast on 26th April and 3rd May, 2008. Raynor, one time script editor on the series, had previously written the Daleks in New York two-parter for Series 3, as well as single episodes for each of the first two seasons of Torchwood.
The story sees the return of the Sontarans after a 23 year absence. They had featured in the classic series four times, equaling the Ice Warriors. They were deemed successful and popular enough to become this season's big returning villains from that earlier era, following the Daleks, Cybermen and the Master. The new design was faithful to their previous appearances, though their uniforms became blue rather than black - partly to differentiate them from the Judoon of the year before. When last seen, in The Two Doctors, the supposedly cloned race had been of different heights, with Commander Stike being particularly tall. The costumes had not been very good, with the headpieces often coming loose from the collars. This time, uniformly small actors were chosen to play all of the Sontarans.
The story is also significant for the return of Martha Jones. Freema Agyeman had reprised the role with a secondment to Torchwood Three earlier in the year in a trilogy of stories. She now works for UNIT. They had featured in the background of the new series since Aliens of London, but this is their first full story since Battlefield back in 1989. In the interim, the United Nations had taken exception to its name being taken in vain, concerned that people might think UNIT was a real affiliate, and so the production team found itself - under threat of legal action - having to rename them. They are now the UNified Intelligence Taskforce. The light blue berets have gone - replaced with red ones, and only the officers wear uniforms similar to regular army ones. The troops now wear black combat fatigues. 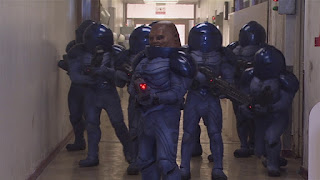 The word "clone" had never actually been used in any of the previous Sontaran stories, but it was always implied that they were cloned due to their mode of reproduction, and supposed identical appearance (though they do not look the same in any of their four outings. Only Styre and his Marshal look and sound identical, thanks to the same actor playing both roles within the same story).
For tools they tended towards robot servants in their first two stories. Raynor chose to pick up on the cloning references. They clone Martha, and plan to turn the Earth into a planet suitable for cloning billions of warriors.
The Doctor quite rightly questions Staal's use of stealth to attack the Earth using ATMOS. Raynor had originally intended that the toxic gases - clone-feed- would be generated by factory chimneys, but Russell T Davies liked to have everyday objects turn potentially nasty. The use of Sat-Nav in cars had grown considerably in recent years, and most children would be familiar with them.
After the verbal sparring which went on when Rose met Sarah Jane Smith, it was decided that Martha and Donna would hit it off straight away, reflecting Martha's new maturity. 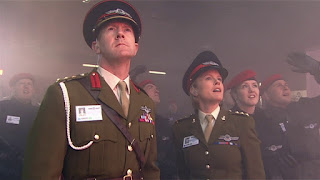 Playing the lead Sontarans are Christopher Ryan, as Staal, and Dan Starkey as Skorr. Ryan had featured in Doctor Who once before - playing the Mentor ruler Kiv in the Mindwarp section of Trial of a Time Lord. Starkey had been a fan of the show since childhood, and had particularly loved the Sontarans - producing a picture he had drawn of them as a child when interviewed about the role.
Colonel Mace is played by Rupert Holliday-Evans, who had recently gained fame with comedian Harry Enfield as one half of the Double-Take Brothers. His second-in-command, Captain Price, is played by Bridget Hodson. Luke Rattigan is Ryan Sampson. He plays Luke as an American, though the actor is really from Yorkshire. Ross Jenkins is played by Christian Cooke. He recently stepped in to play a role in the BBC's  Agatha Christie adaptation of Ordeal by Innocence, when the original actor cast became caught up in allegations of sexual misconduct. All of the character's scenes had to be reshot with Cooke, causing the show to be deferred from a Christmas screening to an Easter one. In 2009 he had starred in ITV's Demons - one of their failed attempts to rival Doctor Who.
The Cliffhangers: 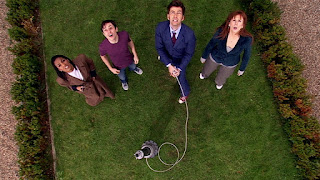 Overall, it is a fairly successful two-parter, with plenty of action. The Sontarans look good and come across as a credible threat en masse, though we could have done without some of Skorr's infantile comments.
Things you might like to know: