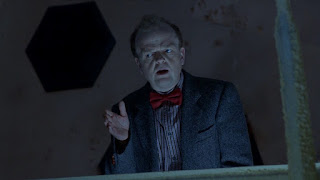 A cruel and manipulative figure who hijacked the TARDIS crew. He could change his appearance at will - appearing initially dressed like the Doctor. He never stated his origins, and took the title Dream Lord as he could manipulate the dreams of the Doctor, Amy and Rory. He presented them with a challenge - to determine which of two scenarios was real and which was a dream. One involved the TARDIS helpless in space, in orbit around a freezing cold star, whilst the other was based in the village of Leadworth, some time after Amy and Rory had left the TARDIS. In this Rory was a doctor, and Amy was pregnant. The village came under attack by aliens called Eknodines, who inhabited the bodies of the elderly, giving them great strength. The creatures could reduce their victims to a pile of dust in seconds. The trio were shunted back and forth between the two scenarios.
When the Eknodines killed Rory, Amy insisted that Leadworth was the dream, and the frozen TARDIS was real, but the Doctor had worked out who the Dream Lord was. Both scenarios were dreams, as the Dream Lord had no power over reality. Defeated, he vanished. The Doctor then revealed that the Dream Lord was created from his own psyche - the product of a grain of psychic pollen which had got into the ship.