D is for... Docherty, Professor 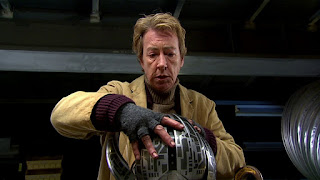 Professor Alison Docherty was a scientist who worked in a lab visited by Martha Jones and Dr Tom Milligan. Martha had information regarding the disablement of a Toclafane sphere, and she wanted to know if the Professor could replicate the conditions to bring down another. In this way they could discover the true nature of the creatures. The scheme worked, and they were horrified to discover that within each sphere was a human head. The Toclafane were what the human race would become in millions of years time. After Martha and Tom had left, Docherty contacted the Master on the Valiant to inform on them, as her son was in a labour camp and she hoped to free him. However, Martha had suspected she would do this all along - knowing that it was her only way to get onto the Valiant in time for the missile countdown which would trigger the Doctor's rejuvenation. When time was set back one year, so that these events never happened, Martha surprised her with a hunch of flowers, telling her she never blamed her for what she did.