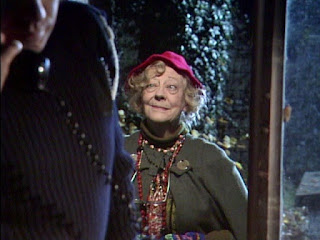 A somewhat eccentric artist, famed for her studies of flowers and plants. When the Doctor and Sarah returned from the South Pole they were the victims of an attempted abduction by an employee of the millionaire Harrison Chase. They found one of her paintings in the boot of his car. This led them to Miss Ducat, who identified the person she had sold it to. She recalled that he had never paid for it. Later, this gave her the excuse to go to Chase's home, but she was really there to get information for Sir Colin Thackeray of the World Ecology Bureau. It was he who had sent the Doctor and Sarah to the Antarctic to research the alien Krynoid seed pod discovered there. She was able to see Sarah and learn that she and the Doctor were trapped in the house. Miss Ducat wanted to do more to help, citing her previous experience manning an ack-ack gun during the last war, but Sir Colin sent her home.

Played by: Sylvia Coleridge. Appearances: The Seeds of Doom (1976).