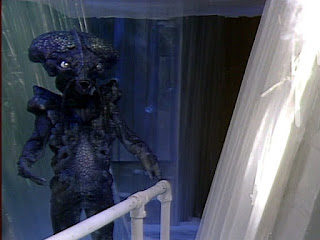 A legendary creature known as the Dragon was said to dwell in the caverns beneath the Iceworld trading post on the planet Svartos. It guarded a great treasure. The intergalactic conman Sabalom Glitz sold his crew to purchase a map that would take him to this treasure. Intrigued, the Doctor decided to accompany him on his quest. It was his companion Mel, and her new friend Ace, who worked in the complex, who encountered it first when they elected to follow them. It was a tall bipedal creature, capable of firing laser bolts from its eyes. The Doctor later identified it as a biomechanoid - an organic creature enhanced with cybernetic parts. It revealed the hiding place of the treasure when it opened up its cranium. Within was a powerful energy crystal. Glitz's map contained a listening device, planted there by Kane, who ran  Iceworld. He was really a criminal from the planet Proamon, exiled here centuries ago by his people. The crystal was the power source for his ship - Iceworld itself. Unable to leave the freezing confines of his inner sanctum, Kane sent guards out to track down and destroy the Dragon. They succeeded, and removed its head, though it was able to kill them as it died.