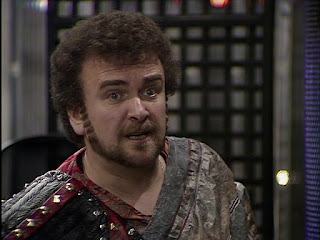 It was reported yesterday that actor Tony Selby has passed away at the age of 83. Lambeth born Selby played the rogue-ish interplanetary conman Sabalom Glitz in two stories in the 1980's. He first appeared in the opening section of Trial of a Time Lord - the four episodes usually known as The Mysterious Planet. Glitz was then brought back by his creator, Robert Holmes, for the story's finale (the two episodes often known as The Ultimate Foe, but to others "Time Inc".
Glitz then returned for the final story of Sylvester McCoy's first season - Dragonfire.
Who knows, had the series not ended in 1989, Glitz may have made the occasional further appearance.
I first came across Selby in the RAF-set sitcom Get Some In!, but you'll spot him in a number of classic 1960's movies, such as Alfie and Witchfinder General. Later work included a couple of episodes of Eastenders and the movie Cockneys vs Zombies.
Tony Selby - RIP.
Posted by GerryD at 15:35