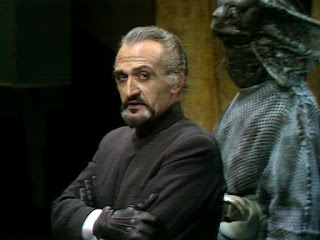 Our knockout competition begins with Season 9 versus Season 5 - both very strong seasons which are probably overall favourites for some fans.
Season 9 marks the mid-point of the Jon Pertwee era, and includes the return of the Daleks after a lengthy absence - and in colour for the first time on TV. The Ice Warriors are also back after a break. UNIT and the Master are both present.
The season comprises: Day of the Daleks, The Curse of Peladon, The Sea Devils, The Mutants and The Time Monster.
These are (mostly) highly regarded stories. Day of the Daleks suffers from some poor direction - such as the failure to pay off the ghosts from the future / past UNIT HQ scene, and the rather feeble battle with just three Daleks. Having a gold leader Dalek was probably a good idea to begin with, but they hadn't considered how the battle sequence would look. And was having gunmetal grey Daleks really the best idea for their first colour outing? Even the 1960's B&W era Daleks were more colourful, with their blue hemispheres.
Pros for this story include the introduction of the Ogrons and some nice performances from both regulars and guest cast. For the first time in a long time, the consequences of time travel are considered, as the guerrillas have gotten themselves tangled up in a temporal paradox.
The Curse of Peladon can be a little wordy, and short on incident, with too much politicking (though not as much as its sequel). Pros include the return of the Ice Warriors (also seen in colour for the first time, but benefiting more than the Daleks did), and the carnival of monsters which include Alpha Centauri, Aggedor and Arcturus.
The Sea Devils introduces another classic '70's monster with its title characters, and brings the original Roger Delgado Master back after a short break, in what is one of his best stories. UNIT are left behind at their HQ as the Doctor teams up with the Royal Navy for this story, and much use is made of RN stock footage.
The Mutants is the second of the stories this season set on an alien world, as the Doctor is sent on missions by the Time Lords. The two previous stories were swapped in broadcast order to split these alien jaunts up. Another political story, with a great monster design. These TARDIS trips do mean that we get to see very little of UNIT this season (which may be a good thing for some people, but not for others like me). Even Day of the Daleks didn't feature them for a large part of the running time, and they don't get to turn up against the Sea Devils.
The final story of the season - The Time Monster - does feature UNIT prominently (though only up to Part Four) and sees a return visit by the Master. It was an attempt to make lightning strike twice after the success of The Daemons at the close of the previous season - but fails badly. It's that dodgy director from Day of the Daleks back again. The story is all over the place, with seemingly random ideas thrown together to try to make a cohesive narrative. Kronos is unimpressive in both its forms.
Apparently, the first recording block for this story was the last time that the whole Pertwee "UNIT Family" (including the Master) were together in studio at the same time. 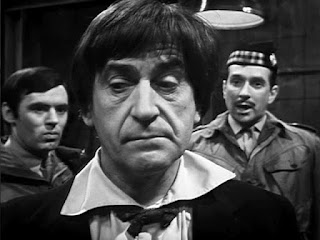 Season 5 is the one which introduces key elements which will go towards making that Pertwee UNIT Family. This one is often called "the Monster Season", or the "base-under-siege" season.
It comprises Tomb of the Cybermen, The Abominable Snowmen, The Ice Warriors, The Enemy of the World, The Web of Fear, Fury from the Deep, and The Wheel in Space.
Cybermen top and tail the season, as this follows on from Terry Nation's withdrawal of the permission to use the Daleks in the series. The producer Innes Lloyd was after a regular enemy which he didn't have to pay extra for anyway, and the Cybermen had taken the place of the Daleks as the new Big Bad. As it was, Nation relented very quickly once he saw that his plans for his creations weren't going to get him anywhere, and he was already saying the BBC could have them back by the end of this season - so long as they didn't feature in any Cyberman story.
It should be noted that only two of these stories exist in their entirety for us to watch today. Recently one completely missing story was fully animated, and I have the audios and telesnaps for the others.
Tomb of the Cybermen was regarded as a perfect story in every way - whilst it was missing. As soon as it came back a lot of flaws were noted, but it still remains a very good story - one of the best Cyberman stories in fact. Whilst we have a monster, this isn't really a base under siege story - unless you say the Cybermen themselves are under siege from archaeologists, as it's their base we're in.
The Abominable Snowmen ticks the boxes for monsters and base-under-siege (in this case the Yeti and a Tibetan monastery respectively). The Yeti appear rather cuddly, and yet they seem to work as monsters. The setting is unusual - bases under siege in the programme tending to be high-tech scientific or industrial environments.
The Ice Warriors sees another popular new monster introduced, and another odd base, in that it is a scientific establishment - but it's set up in a Georgian mansion. The third story in a row with a cold, icy backdrop - and we're going to be on Earth for 5 consecutive stories, which the Doctor will even mention in dialogue.
The Enemy of the World is monster free, but does have a human villain who just happens to look identical to the Doctor. It's a globe-trotting spy-fi story, which was generally reviled when only Episode Three existed, but was revaluated positively once the rest of it turned up.
Before the first Yeti story had even been broadcast, a sequel was commissioned. The Web of Fear is one of that rare beast - a sequel which is better than its original. Significant for the first appearance of Nicholas Courtney as Lethbridge-Stewart - here a colonel but soon to be a brigadier - the Brigadier.
Fury from the Deep has always been held in high regard as a rather superior example of the monster / base-under-siege story. Companion Victoria bows out in this story, though Debbie Watling will be credited in Episode One of the next story - the return of the Cybermen in The Wheel in Space. Watling only appears in a reprise of the ending of the last story, but her replacement doesn't appear until Episode Two of this - Wendy Padbury's Zoe. The Cyber-plan is quite insane, and it is a real drop in quality from the story which opened this season.
So - which season do I prefer? Season 9 is a good one, but I think the series on either side of it are superior. The Dalek story is one of their weakest, and the closing story isn't terribly good.
I am a Troughton fan, and a Cyberman fan, and Season 5 offers a great run of stories. Yes, lots of bases come under lots of sieges, but there is enough variety in settings for this not to be a problem.
Season 5 therefore wins, and in Round 2 will compete with the winner of the next match...
Posted by GerryD at 19:47

Email ThisBlogThis!Share to TwitterShare to FacebookShare to Pinterest
Labels: KO's