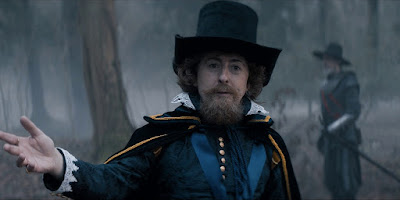 The Doctor and her companions met King James I of England (and VI of Scotland) when he was investigating witchcraft in Lancashire, in 1612. Local landowner Becka Savage had uncovered and punished numerous witches in the area around Pendle Hill. James was travelling incognito with a small party of servants. At first James took the Doctor for an ally. Her companion Graham was made Witchfinder General, whilst the monarch took a personal shine to Ryan. However, Becka Savage soon turned James against the Doctor, accusing her of being a witch herself.
It transpired that the witches were really reanimated corpses inhabited by an alien presence - the warlike Morax. Becka herself had become possessed by them. The Morax had been buried under Pendle Hill in prehistory, and Becka had accidentally freed them.
James helped to trap the Morax back in their prison, and he used a flaming torch made from wood which was toxic to them to kill their queen which possessed Becka.
The Doctor later urged James to be more open minded, and less superstitious.
Played by: Alan Cumming. Appearances: The Witchfinders (2018).
Posted by GerryD at 19:46