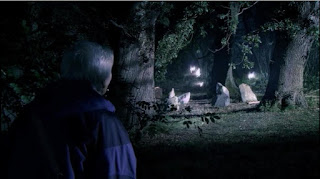 In which Jack wakes from a vivid nightmare - a memory of something which happened to him decades ago. As an officer in the British army he was traveling through India in the boxcar of a train when it passed through a tunnel. Within seconds, all of his men were dead - suffocated with rose petals. Jack finds a lone petal beside his bed. The next day he takes Gwen to see a lecture about local folklore, given by an old friend of his named Estelle Cole. She has taken some photographs which she claims show Faeries, taken in a local woodland.
At Estelle's home, Gwen sees a photo of her as a young woman, with a man who looks exactly like Jack. He claims that this was his father, who courted Estelle for a time. Jack warns Estelle that Faeries are not the benign creatures she believes them to be, but she refuses to accept this. Outside, he tells Gwen that they are beings from outwith Time itself and are totally amoral. Back at the Hub, Jack asks Toshiko to monitor for any unusual weather events, as these can indicate Faery activity. 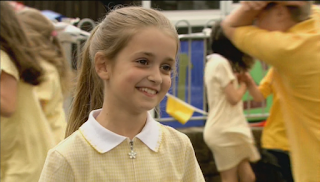 A young girl named Jasmine lives in a house that backs onto the woodland where Estelle saw the creatures. She is a solitary child, with no friends, and who does not get on with her mother's boyfriend, Roy. He fails to pick her up from school and so she walks home. A man named Mark Goodson attempts to lure her into his car. Jasmine does have friends - ones that only she can see. A fierce wind forces Mark to withdraw and he feels that someone is hunting him. In a nearby market he begins to regurgitate rose petals. He finds a police officer and asks to be arrested, admitting that he is a paedophile.  In custody, he dies - suffocated by petals. Jack and Gwen are called in to investigate the death. Jack tells Gwen about the events in India, back in 1909. Some of his men had drunkenly run over and killed a child. This child was a chosen one for the Faeries, and this is why they killed his men in the train.
That night Estelle hears someone prowling outside her home and calls Jack. Going out into the garden to fetch her cat she is caught in a torrential downpour. This freak weather is spotted in the Hub. By the time Jack gets to the house, Estelle has died from drowning. Jack admits to Gwen that the man in the photo was him. Returning home, Gwen finds her flat has been ransacked. A miniature sculpture, like a stone circle, has been left on the floor. 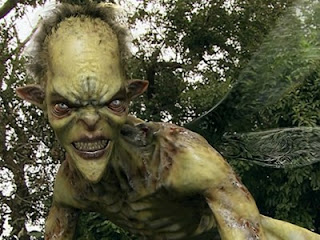 The next day, Jasmine is bullied at school. The playground is buffeted by strong winds, causing everyone to panic - all except Jasmine. Owen has discovered that the piece of woodland where Estelle saw the Faeries - Roundstone Woods - has always been wild and never been built upon, despite redevelopment all around it. It contains an ancient stone circle. When Jack and Gwen investigate the school, Gwen is convinced that something is watching them from the trees. They decide to go and speak to Jasmine. Roy has boarded up the fence to stop Jasmine from going into the woods. A party is being held to celebrate the fifth anniversary since Roy started going out with her mother. It is attacked by winged, green-skinned creatures. One of them kills Roy, suffocating him. Jasmine runs into the woods. Jack realises that the girl has been chosen to join the Faeries, and that nothing will prevent this. To the horror of his colleagues and her mother, Jack allows the creatures to take Jasmine.
Back at the Hub, Gwen is studying images of the Cottingley Fairies, taken in 1917. She zooms in on one of the faces of the dancing figures, and sees that it shows a smiling Jasmine. 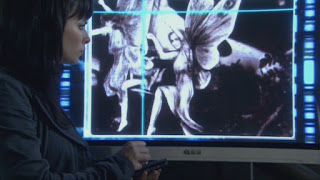 Small Worlds was written by P J Hammond, best known for creating Sapphire and Steel. It was first broadcast on 12th November, 2006.
Hammond had been sounded out for a Doctor Who contribution by script editor Eric Saward in the mid 1980's, though nothing had come of the approach.
For a change, there are no alien aspects to the story, though Jack does reference a monster from the classic era of Doctor Who. The Faeries are Earthbound creatures, who have always lived alongside us, though they don't follow linear time. I've read a lot of Scottish folklore, and Faeries feature prominently. The stories rarely show them in a benign light. At best they are amoral. They are often alleged to steal children, or nursing women to feed their own children, replacing them with a piece of wood. Another popular tale is that of the person who joins them in a dance. He thinks he has only been with them a few hours, whereas a year or more has really passed. In one version, a whole century has gone by.
Child abduction features in the Doctor Who series 2 story Fear Her, but at no point is it ever even suggested that this may be due to a paedophile. Small Worlds tackles this subject head on, in the character of Goodson. 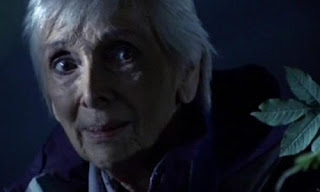 Jasmine is played by Lara Phillipart. She features in The Idiot's Lantern, watching the Coronation at the Connolly household. Estelle is Eve Pearce. She's a poet as well as an actor.
Overall, one of the highlights of the first season. Hammond is a great writer, and his contribution to the second season will be one of its best.
Things you might like to know: