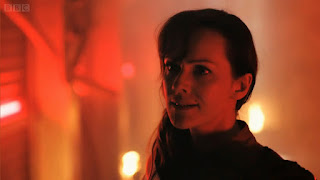 Pilot of a spaceship which was breaking up near the orbit of the planet Karn. She had transported her crew off the vessel and stayed behind. The Doctor materialised the TARDIS aboard the vessel and attempted to rescue her. On discovering that he was a Time Lord, she refused to go with him - believing both sides in the Time War to be just as bad as each other. The Doctor decided not to leave her, and remained on the ship when it crashed. He was taken from the wreckage, dying. Cass was already dead, and the Sisterhood of Karn could not bring her back. This prompted the peace-loving Eighth Doctor to regenerate into the incarnation known as the "War Doctor".