C is for... Catchlove 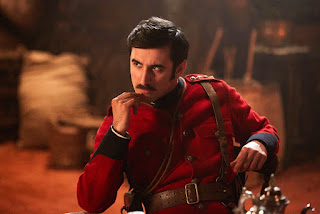 Captain Neville Catchlove was second in command of a British Army unit which discovered a hibernating Ice Warrior in South Africa. The Ice Warrior awoke, and was named Friday by the soldiers. It talked them into repairing its ship and taking it home to Mars with the promise of fabulous wealth. Catchlove knew that their commander, Colonel Godsacre, had a secret to hide. He had once escaped a hanging for cowardice. This gave him a hold over the older officer. When Friday helped to resurrect the Ice Empress Iraxxa, Catchlove took charge and was happy to exterminate the Ice Warriors. When it became clear that they could not win, he decided to abandon his colleagues and flee in the spaceship, taking Iraxxa hostage. He was shot dead by Godsacre.