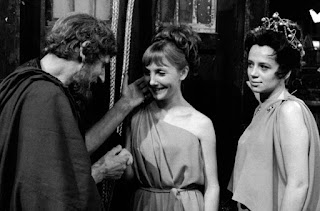 Daughter of Priam, King of Troy. She feared that the city would fall after it accepted a gift from the Greeks, and at first thought that this might be the TARDIS, which brother Paris had found. She insisted it be burnt - prompting Vicki to leave the ship. Cassandra could foresee the future, though she was cursed that no-one would believe her prophesies. When it became clear that Vicki knew Steven, who was posing as a Greek warrior, Cassandra had her thrown into prison. When the city fell, Cassandra was taken captive and given to Agamemnon. Her handmaiden, Katarina, joined the TARDIS crew.