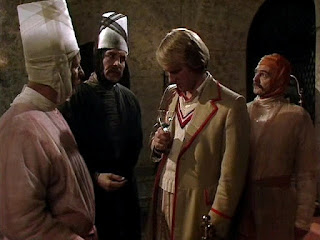 According to the TARDIS databanks, on the planet of Castrovalva existed Dwellings of Simplicty. Here, the Doctor would be isolated from all technology, and so free to heal after his fourth regeneration. Castrovalva appeared to be a hilltop citadel, and its people were a friendly, peace-loving humanoid race. They engaged in ritualised hunting parties, wearing furred, masked costumes that had belonged to their ancestors. Librarian Shardovan refused to participate in these hunts. Their leader was a wise old man - the Portreeve. The Doctor was placed under the care of physician Mergrave, and soon recovered. He decided to read the history of Castrovalva, which chronicled the city from the coming together of various tribes up to the present day. He discovered that, though supposedly old, this had been written by Shardovan. He soon became aware that Castrovalva was not what it appeared. It was subject to dimensional instability. Mergrave became confused about its geography when asked to draw a map showing his apothecary. Shardovan had created the history because he had come to realise that his people had none. They were all a creation of the Master, harnessing Adric's mathematical skills to create block transfer computations. He had been the Portreeve in disguise.
When the Doctor freed Adric, the city began to collapse in on itself. The Castrovalvans turned on their creator - ensnaring him in his own trap.