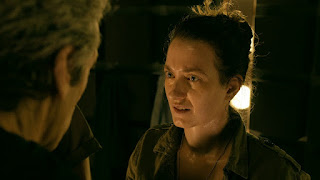 Crew member of the Drum - an underwater mining facility in a flooded valley in the North of Scotland. The crew had found a strange craft on the lake bed and brought it into the complex. Its engines suddenly fired - killing the commander, Moran. His ghost appeared moments later, and the crew had to seek shelter in a Faraday Cage which the spirit Moran could not enter. Another, alien, ghost appeared - dressed like a funeral director.
As Cass was second in command, she took charge. She had been deaf since birth, and had a colleague named Lunn who signed for her. Cass was very protective towards Lunn - refusing to allow him to enter the craft. Fortunately, this prevented him from becoming a victim of the ghosts - transformed into another of their kind. Her protectiveness was because she was in love with him, but didn't feel she could say so. He was secretly in love with her in return.
Lunn's immunity proved helpful once the Doctor and Clara arrived and helped them investigate what was going on. Whilst Cass couldn't hear an approaching ghost, she could feel the vibration of the axe it was dragging, and this saved her life.
Another victim of unrequited love, her colleague Bennett convinced Cass and Lunn to admit their feelings towards each other after the ghosts had been neutralised.

Played by: Sophie Stone. Appearances: Under the Lake / Before the Flood (2015).