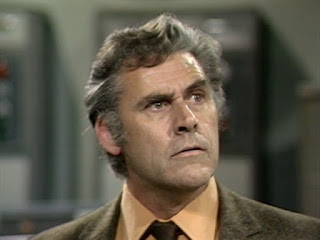 Dr Carter was a pathologist at the hospital to which Sarah Jane Smith was taken after being caught up in a quarry blasting accident. At the Doctor's behest he investigated the stone hand which she had been found clutching. The hand appeared to have a helical structure like DNA, and it absorbed radiation from the electron microscope examining it. Sarah woke and stole the hand, knocking Carter out with a blast of energy from the blue crystal ring which the hand had worn. Carter insisted on accompanying the Doctor to the Nunton Nuclear Power Complex, where Sarah had taken the fossil.
The ring caused anyone who came under its influence to fall under the power of the hand's owner - an alien named Eldrad. They were compelled to prevent anyone from hindering the hand's attempts to reconstitute itself. Crying "Eldrad must live!", Carter attacked the Doctor with a wrench, but he lost his balance and fell from a high gantry to his death.