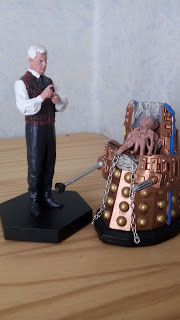 Three figurines again this month - two regular releases plus the latest of the special editions. First of all we have the Professor Yana Master. An extremely good likeness of Derek Jacobi.
With him is Dalek Caan, as he appeared in The Stolen Earth / Journey's End, with the casing broken open. This is one of those figurines that looks odd out of context, being so brightly coloured. On screen it was kept in a harsh spotlight, in a darkened chamber. 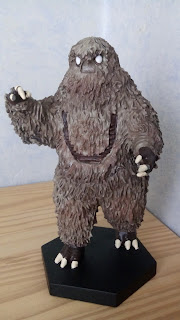 The special edition figure is the Yeti, as it appeared in The Web of Fear. It is roughly twice the size of the normal figurines. Unfortunately, mine came with a couple of the talons broken off - that's three months running I've had to get the super-glue out. Either Eaglemoss need to improve their packaging, or my postman has to to go.
Next month we will be treated to Sharaz Jek, from The Caves of Androzani, plus - what it possibly the most pointless release yet - the Space Pig from the Series 1 Slitheen story. October sees an Ogron plus a Cheetah Person, whilst the next special edition will be Aggedor.
Posted by GerryD at 18:26