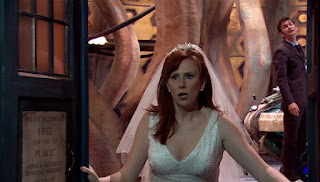 In which the Doctor, having just said farewell to Rose Tyler, is confronted by a woman in a wedding dress standing in the middle of his TARDIS. Her name is Donna Noble, a secretarial temp from Chiswick, West London. She had just been walking down the aisle, about to get married to fiance Lance on Christmas Eve, when she was suddenly transported here. The Doctor runs a number of tests but can find no explanation for how she came to get inside his ship. She is naturally furious, believing she has been abducted, and she orders the Doctor to take her to the wedding. The ship lands several miles away, so they decide to get a taxi. As the Doctor secures some money, he sees a group of Santa Claus-costumed musicians, and recognises them as the "Pilot Fish" he had encountered the previous Christmas. Whilst he creates a diversion, Donna gets into a cab and drives off alone - but the Doctor spots that her driver is one of the Santa figures. He gives chase in the TARDIS whilst the driver fails to take Donna where she wants to go. The ship sweeps down to fly alongside the cab and the Doctor deactivates the driver - which turns out to be a robot. Donna is forced to leap from the speeding cab into the TARDIS. 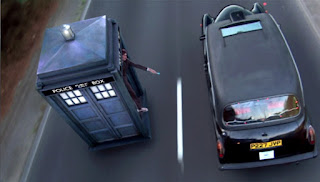 The TARDIS materialises on a rooftop in the City, where the Doctor and Donna get a chance to discuss what might be going on. It is obvious that some alien power is trying to kidnap Donna. The Doctor gives her a ring, which acts as a bio-damper. This should prevent her being traced. She has missed her wedding, and so the Doctor takes her to the hotel where the reception is taking place. She is livid that they have gone ahead and started the party without her. To avoid awkward questions, she feigns distress. The Doctor borrows someone's mobile phone and uses it to look up the firm H C Clements, where Donna has been working. He discovers that it is a security company, which is a front for a Torchwood operation. He notices a guest filming the festivities, and asks to see footage from the point when Donna was taken from the church. He sees her surrounded by a bright yellow glow, which he recognises as Huon Particles. These are ancient in origin and the bio-damper will not shield against them. The function is attacked by the Santa robots, using explosive Christmas Tree baubles, but the Doctor destroys them with amplified sound. He uses their control device to locate a craft in space above the Earth. 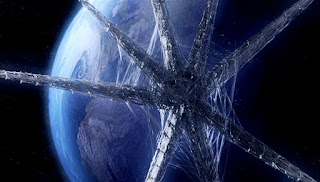 The Doctor and Donna go to H C Clements with Lance. Donna explains how she first met her fiance, when he made her a cup of coffee, which he then did every day. She claims that Lance pursued her, whilst his recollection was the other way round. They discover that there is a hidden level beneath the building. Here they find that Torchwood have been drilling a shaft down to the centre of the planet. In a lab, Huon Particles are being created. They are confronted by the Roboforms, and then a massive scarlet spider creature materialises. She is the Queen of the Racnoss. The Doctor believed these ancient creatures to be extinct, having been wiped out by the Time Lords and the other races from the beginning of the Universe. It transpires that Lance is in league with her - charged with dosing Donna with Huon Particles in her daily coffees. The excitement of her wedding day activated these and drew her to the only other source of Huons in the vicinity - the TARDIS. The Doctor and Donna escape in the TARDIS and travel back to the creation of the Earth in order to discover what the Racnoss might want at the centre of the planet. They see one of their Webstar spacecraft become the gravitational focal point for the matter to form around and so create the planet. The Racnoss Queen intends to use the Huon Particles to resurrect her millions of children hibernating in the ship. 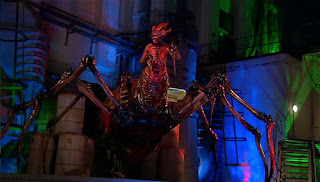 On returning to the drill shaft chamber, Donna is captured. Thinking Donna had been lost to her, the Queen has dosed Lance with Huons and she uses him instead. He plunges down the hole, and the Racnoss children are awoken. The Doctor sneaks back disguised as one of the Roboforms, but is spotted by the Queen. He gives her an ultimatum to leave the Earth or face the consequences. She refuses to obey, so he employs some of the explosive baubles to begin destroying the chamber. They are beneath the Thames, and the river breaks through. Flood waters pour down the shaft, drowning the Racnoss children. The Queen teleports to her Webstar and brings it down to the skies above London. It begins to attack the city. The army arrive, with orders from a Mr Saxon to destroy the vessel. Combined firepower blows it up. The Doctor takes Donna to the street outside her home. He offers her the chance to travel with him, but she declines. Knowing that he recently lost someone who travelled with him, she recommends that he find somebody else, as when he is on his own there is no-one to keep him in check. 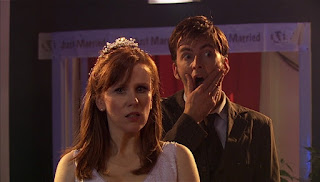 The Runaway Bride is the second Christmas Special to be written by Russell T Davies, and it was first broadcast on 25th December, 2006. Under no circumstances should it be mistaken for the 1999 rom-com starring Richard Gere and Julia Roberts - though that sort of screwball comedy was precisely the feel that Davies was trying to get with this episode. Hollywood has a long history of movies about odd couples being thrown together by adverse situations, antagonistic towards each other at first but who end up good friends, if not romantically involved.
It introduces the character of Donna Noble, who is played by comic actor Catherine Tate. The Santa Claus Roboforms return from the previous special, but with a different mask design - more plastic than metal, and this time we get to see what lies beneath.
The plot was originally developed to be an episode for the second series, but Davies saw how the bride character could be enhanced to provide a good role for a special guest artist once he found out that there would be a second Christmas Special. It was never envisaged at this point that Donna would return as a companion, as a journalist character named Penny was developed to eventually replace Martha Jones.
This episode, had it been in Series 2, would have been second - so was replaced with Tooth And Claw.
Davies had populated his first  Christmas Special with a lot of festive icons, so this time he brought back the killer Santas, and had them employ the exploding tree baubles. The Racnoss spaceship was designed to look like a star.
Unfortunately, the filming in the summer of 2006 is apparent on screen, and it never convinces the viewer that events are taking place at Christmas time. We see great swathes of greenery in a number of early scenes.
As with last year, the TARDIS gets to do a bit of stunt work, and the motorway chase is certainly one of the highlights of the episode. 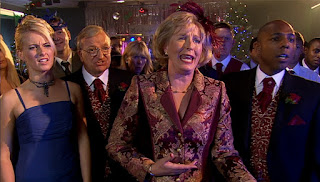 Joining Tate we have Sarah Parish playing the Racnoss Queen. Her costume is purely physical, the main body operated mechanically. Parish had starred alongside David Tennant in a BBC drama about a family man recuperating from head trauma (Recovery) as well as the excellent Blackpool. Donna's parents are Jacqueline King, as her mother Sylvia, and Howard Attfield as dad Geoff. Lance is Don Gilet. Donna's arch enemy, Nerys, is played by Krystal Archer. Some of these characters we will be meeting again in a year or two.

Story Arcs:
The tank commander announces that Mr Saxon has given orders to fire on the Webstar.
This episode picks up directly from the closing moments of Doomsday. One of Rose's tops is still in the console room. The Doctor reminisces about her as he watches the guests enjoy themselves at the reception. 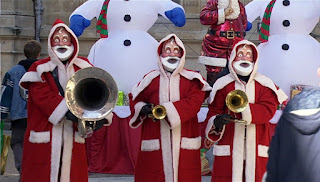 Overall, not quite as good as the previous year's special, but it has a lot of good points. The DWM 50th Anniversary poll had it at number 153, out of 241 - 5 places ahead of the Kylie Minogue Christmas episode that follows it. Much depends on your opinions about Catherine Tate's Donna. She's certainly extremely abrasive when we first meet her, but her experience with the Doctor changes her, and she is a much more likeable character by the conclusion.
Things you might like to know: