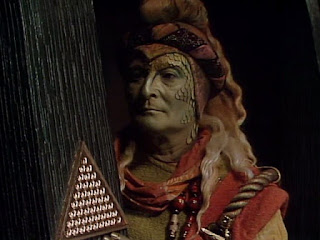 Leader of the people of the planet Lakertya. When the Rani arrived with her Tetrap soldiers, Beyus elected to co-operate with her. In this way he hoped to save lives. One young man - Ikona - saw his actions as capitulation and collaboration, and thought him weak. When the newly regenerated Doctor arrived on the planet, he too argued against Beyus' behaviour. Beyus saw his daughter, Sarn, killed by one of the Rani's deadly traps, and began to doubt what he had done, but persevered with his help for the Rani. He wanted her to complete her work then leave them alone. However, he discovered that her experiments would result in the destruction of Lakertya, and so finally made a stand. He sacrificed himself to blow up the Rani's Time Brain and delay the launch of her missile that was due to explode an asteroid composed of incredibly dense Strange Matter.

Played by: Donald Pickering. Appearances: Time and the Rani (1987).