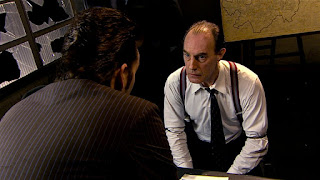 In the run-up to the coronation of Queen Elizabeth II in June, 1953, Detective Inspector Bishop was tasked with suppressing knowledge of strange events taking place in the area around Florizel Street in Muswell Hill, North London. People were being found in a zombified state, and who had no faces. Bishop and his men rounded them up and kept them hidden in an abandoned warehouse. Many were informed on by a local man named Eddie Connolly - including his wife's mother. Bishop was at a loss to explain the cause of the affliction, or to stop it spreading. Even Torchwood were unable to help.
The Doctor broke into the warehouse and was arrested by Bishop. When another victim was brought in, the Doctor recognised her as Rose Tyler. He quickly manipulated the policeman into following his guidance, and they went with Eddie Connolly's son Tommy to the electrical goods shop of Mr Magpie, where the Doctor suspected that the answers lay. They were attacked by the Wire, and Bishop had his face removed. He would have been restored once the Doctor trapped the Wire on a video tape, to be recorded over later.