B is for... Berserkers 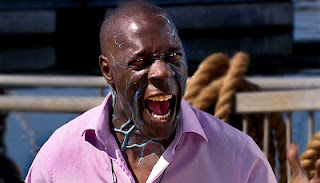 An ancient race of warriors. One of their pendants found its way to Earth where it affected a schoolboy named Jacob. It left a strange tattoo pattern on his hand, and caused him to change physically, with blue veins standing out on his skin. He found he could make people do whatever he told them. Sarah Jane Smith's young friend Rani got hold of the pendant and took it to her attic. Sarah was away from home at the time, and it fell into the hands of Clyde Langer's estranged father, Paul. He had turned up after years away, and Clyde took him to the attic to prove that he and his friends fought aliens. Intent on winning his son back, Paul made him forget about his friends and even his mother. He forced people to do anything he said - including making Rani's father do continuous press-ups, which almost killed him. He made a salesman hand over a sports car, and father and son ran off to the coast. Paul underwent the physical transformation - turning into a Berserker. He was going to turn Clyde into one of his soldiers. Sarah returned in time to force Paul into realising what he had become, and to remember who he really was. He relinquished the pendant, which was then thrown into the sea.