Five things I learned this week:
1. The Time Lords were first name-checked in the Radio Times six weeks before Episode 9 of The War Games.
2. And Gallifrey was named in TV Comic a whole five months before Episode 3 of The Time Warrior.
3. The Cybermen were supposed to have the Ogrons' role in Frontier In Space.
4. I always thought the Walls Sky-Ray Doctor was a poorly drawn Troughton, whereas it was supposed to be an entirely new Doctor (Troughton not giving permission for his likeness to be used).
5. That Julian Glover as King Richard wore the same tunic that Mark Eden had worn as Marco Polo.
The latter three are from "The Vault" book, which I finally got round to reading, the first two from this week's Radio Times anniversary issue.

With the third and final day of the official Convention closing today, the celebrations come to an end. All of the TV and radio programming will be available for the next week on i-player, or is already out there on You Tube.
The two big highlights were The Day of the Doctor and An Adventure In Space And Time. I enjoyed them both. Lowlights were the BBC3 items - which tended to trivialise with their use of third rate comedians. I gave up on the "Afterparty" as soon as One Direction were announced - switching to the "Behind the Lens" feature on the Red Button service. Also on the Red Button was "The Five(ish) Doctors Reboot" - another highlight of the week. So 5, 6 and 7 did make it into the special after all - if only covered in dust sheets.
Matthew Sweet's Culture Show Special was also well worth watching.
Of the CBBC stuff, 12 Again was my favourite, as  mentioned yesterday. This involved interviews with Louise Jameson, Sylvester McCoy, Warwick Davis, John Culshaw, Dan Starkey, Neve Mcintosh, Tommy Knight, and the annoying CBBC presenter who also does the DWM Time Team feature - all giving their memories of watching Doctor Who when aged 12. For some it was Hartnell, others Tom Baker, and for young Tommy Chris Eccleston.

A couple of snippets of news from the Convention - Series 8 commences filming in January, and the contents of Room 11 (from The God Complex) are going to be revealed - presumably in the Christmas Special. Colin Baker is still banging on about not getting into DOTD properly in an interview today - his nose out of joint that his namesake got to appear. Sorry Colin, but Tom is, and always will be, a hundred times more popular than you and you will always be propping up the bottom of the polls. Stick to BF. 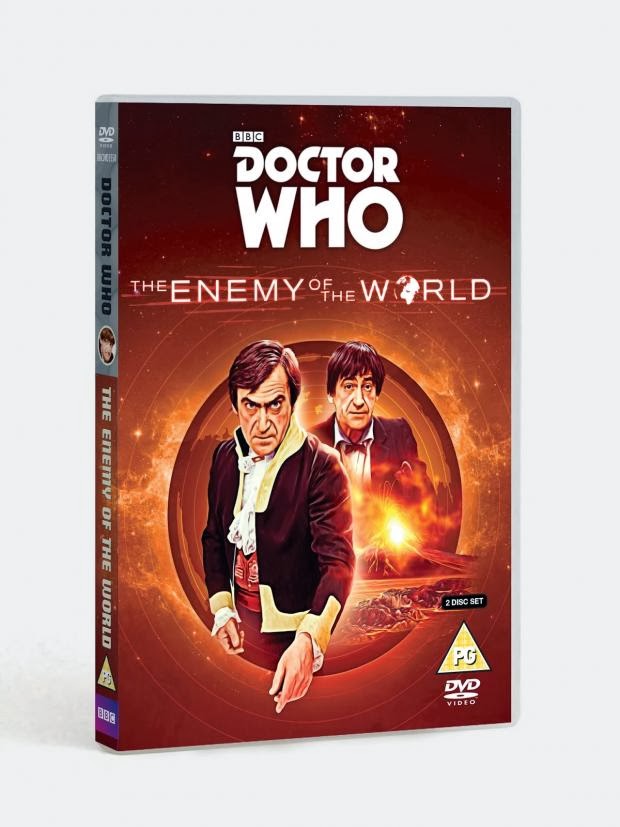 Looking ahead, tomorrow sees the DVD release of The Enemy of the World. Those impatient amongst you who bought the episodes from i-tunes please note that this has been Vid-fired and is of far superior quality. No further news on those Marco Polo rumours. We'll have to wait until the "Missing Believed Wiped" event in the first week of December.
Last night, straight after DOTD, we got our first teaser trailer for the Christmas story. Bells tolling, Trenzalore, Daleks, Cybermen, Silents and Weeping Angels. Silence Will Fall.

Lastly, with the anniversary out of the way, and before things start to build up towards that Christmas Special, I am taking a little break. I'll be back next Sunday, ready to start musing on the next 50 years of Doctor Who...
Posted by GerryD at 22:32